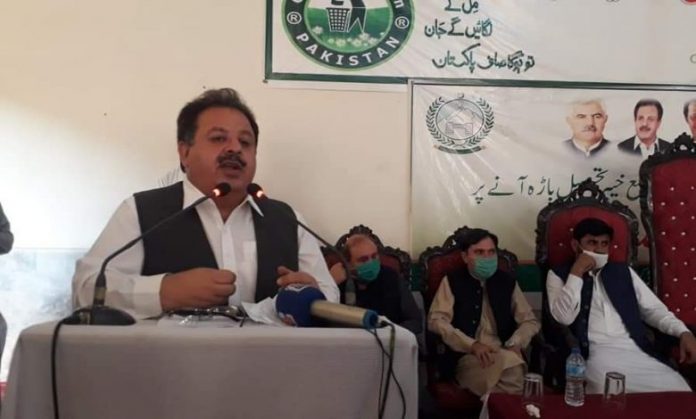 BARA: Khyber Pakhtunkhwa Minister for Local Government and Rural Development Akbar Ayub Khan on Tuesday conducted a visit to Bara tehsil of Khyber tribal district and issue directions regarding solution of different problems of the people.

The minister said while addressing a ceremony in Bara that first time in history of the country, the Pakistan Tehreek-e-Insaf (PTI) government is undertaking all development projects in merged tribal districts after consultation with the local people. He said the PTI government is making special emphasis on development and prosperity of merged districts.

Akbar Ayub said KP ministers are conducting visits to merged districts regularly on the directions of Prime Minister Imran Khan and Chief Minister Mahmood Khan. He said the people of tribal districts will soon see the fruits of positive change. He said moving forward the merger process of erstwhile Fata with KP was a big challenge, but the PTI government carried out reforms in a well planned manner and it is moving forward to bring merged districts on par with developed areas with a rapid pace.

The local people informed the minister about their urgent problems and the minister issued directions to the district administration about resolution on these problems. He directed the Municipal Administration to make sure sanitation of Bara Bazaar and provision of clean drinking water and washrooms facility. He assured that local people will be appointed on jobs in merged districts. He also assured establishment of a building for Bara Press Club and state-or-the-art Jirga Hall in Bara tehsil. He also emphasised widening of Tirah Bagh Bazaar and working of municipality there.

The minister said the Government Degree College Kohi Sher Haider will be upgraded, second shift classes will be commenced there, separate college will be established for women, and problems at Dogra Hospital will also be resolved. He also announced establishment of 10 handcrafts centres for women in Bara. He said strict monitoring of the development schemes will be ensured for transparency and timely completion. He said work on Sheen Kamar-Mastak road is also continuing with a rapid pace.