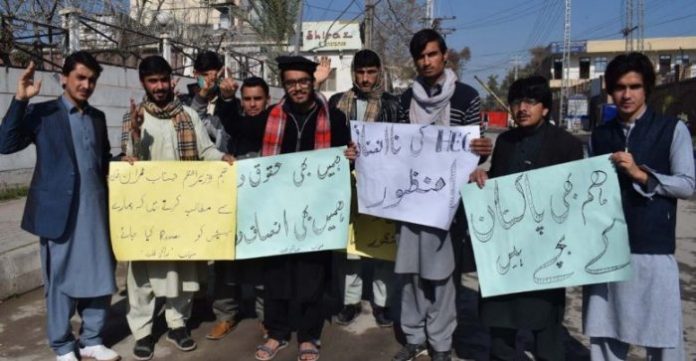 PESHAWAR: The students of Bahauddin Zakariya University hailing from merged tribal districts have staged a protest camp outside the Governor House of Punjab for restoration of seats previously allocated on quota basis.

The protesting students are of the view that the government had promised the people of erstwhile Fata at the time of merger with Khyber Pakhtunkhwa that the admission quotas of students of merged districts in universities will continue, but that did not happen.

The Awami National Party (ANP) leader from South Waziristan Taj Wazir said conspiracies are being hatched to turn the people f merged districts against the merger decision. He said special admission quota was specified for students of merged districts in universities of the country because tribal districts lacked facilities of colleges and universities.

Taj Wazir said the people of merged districts have already endured countless difficulties and they must not be subjected to discriminatory attitude any further. He said it is the responsibility of the governor and chief minister to intervene and save the future of students from merged districts.

The ANP leader said it is a matter of grave concern that the present government which came into power with the slogan of education revolution has left the students of merged districts in a lurch and they are now staging protests on roads instead of focusing on their studies.

The students of merged districts have staged several protests for restoration of admission quota, but still this problem remains unresolved.

Recently, the administration of Bahauddin Zakariya University Multan reduced the special seats for the students of erstwhile Fata and Balochistan and also made the payment of fee mandatory.

The students of merged districts said this decision is a big injustice with Pakhtun students. The students alleged that the reduction of special seats and fees payment decision has not come from the Punjab government, but an individual, and that is the vice chancellor.

They said admissions must only be given to students at Bahauddin Zakariya University on special seats after verification by local deputy commissioner. The students said the level of education facilities in merged districts has not reached the satisfactory level and still there is a long way to go to achieve that end.