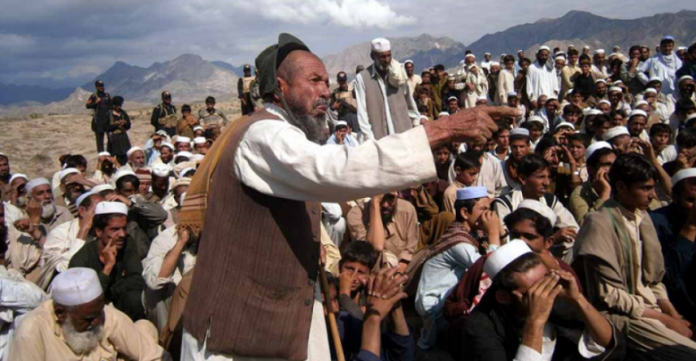 PESHAWAR: Over 27,000 sq km area of erstwhile Fata was inhabited by the Pakhtun tribes and since centuries it was a lawless region governed by tribal traditions.

The British rulers had made an agreement with the independent tribes of erstwhile Fata to maintain their internal independent status and Quaid-e-Azam Muhammad Ali Jinnah also retained that status for the tribal areas after independence of Pakistan. The British rulers had guaranteed internal autonomy for the tribes on the condition that they will not disturb law and order. Under the agreement, it was mandatory for a leader of a tribe to hand over fugitives from the settled areas. In case of failure to hand over the fugitives, the government took action against the respective tribe and arrested its members.

Presently, a large number of people originally hailing from the tribal areas are living in settled areas of the country. The tribal traditions are not followed very strictly now and tribal people after increased interaction with people from settled areas are now gradually doing away with some traditions which had made their lives difficult.

Despite the merger of erstwhile Fata with Khyber Pakhtunkhwa in May 2018, the FCR, which is termed as black law by most tribesmen, continues to haunt them. Tribal Maliks are still ruling the roost and they are usurping the public funds, while the poor people are still deprived of their basic rights.

Tribal Maliks often join the Khassadar Force and then then become Subedars and Babus and earn millions, but no one makes them accountable. Most people are even not aware about their rights. Those who get higher education leave the area and those left behind remain deprived of basic facilities. The poor people don’t have resources to educate their children, while Maliks occupy all the resources and after them, their children occupy their place, therefore, the status quo continues. The children of people run from pillar to post for getting jobs, while the children of Malik join Khassadar Force and start corruption from the outset.

The young generation was frustrated over this situation and some of them even indulged in negative activities. Wars have brought irreparable loss to Pakhtuns and now the tribal youth has realised that they will have to step up to change their destiny. The Fata-KP merger has given them a new hope and they want completion of the process without delay. The merger will bring the tribal districts under the state laws and all the citizens will be treated equally. Now tribal areas will also be governed under the laws which govern Islamabad, KP, Sindh and Balochistan.

The development process will benefit the tribal youth and they will have direct access to jobs. Development in the field of education will also guarantee bright future for the tribal youth. The merger will definitely yield positive impact on the social fabric of the tribal life.