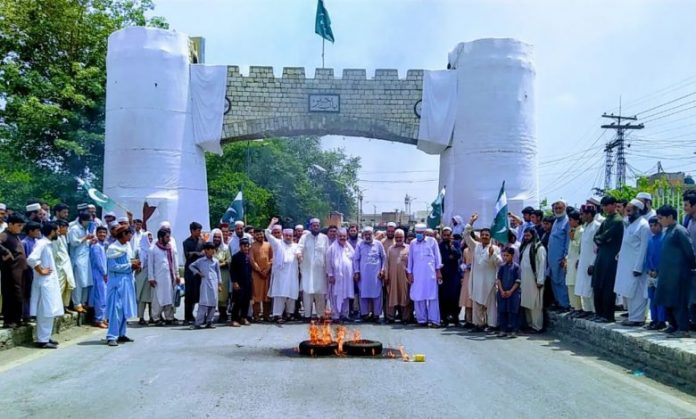 JAMRUD: The tribal elders on Tuesday staged a protest demonstration at Bab-e-Khyber to record agitation against what they called the forcible and undemocratic merger of erstwhile Fata with Khyber Pakhtunkhwa.

The protesters gathered at Bab-e-Khyber, burned tyres on the road and blocked it for all kinds of traffic due to which the commuters and transporters faced difficulties in hot weather.

Speaking during protest, tribal notables including Khyber Qaumi Jirga Chairman Malik Bismillah Khan, Malik Salahuddin, Malik Israrullah, Malik Shujaa, Malik Pervaiz, Malik Daud, Malik Syed Kabeer, Malik Tehmash Khan Shalmani, Malik Aseel Khan and others said the people of merged districts are strictly against the patwar and police system. They said the Khassadar and Levies personnel are subjected to injustice. They said policemen are appointed in merged districts from other districts of KP which is a usurpation of the rights of the local youth.

Malik Bismillah said the transport system of tribal districts is also below par and people suffer a lot due to this system.

Malik Daud said the people of merged districts would not allow raids by police against tribal traditions.

The tribal elders said at the end of the protest that the merger must be reversed and status of a separate province must be given to merged districts. They said they will continue their protests till they get ‘justice’.