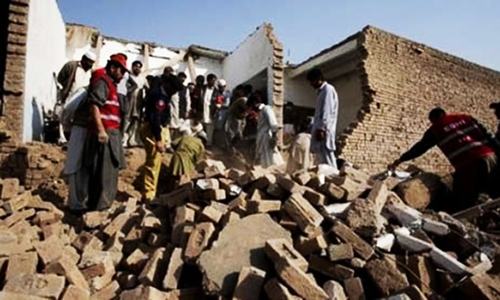 They said that militants planted explosives in government primary school in remote Mardana Mera Kabat village that is located on Pak-Afhgan border and blown it up.

They said that two rooms were razed to the ground while remaining building was damaged so badly that it could not be used and needed to be reconstructed.

The officials that village is located on this (Pakistani) side of the border with Doglam on the other from where militants would regularly fire missiles.

No loss of life or injury took place as the school was closed. A case has been registered against unknown militants and investigation is underway.

Militants have burnt a girl school in Ursoon area of the district few years ago that was also located on Pak-Afghan border.

Talking to TNN, Station House Officer Arandu police station Murad Khan said that around 90 students were enrolled in the school. He said that the village is half-a-kilometer away from the border therefore it was an easy target. The police said that Alhurra group of Tehree-e-Taliban Pakistan claimed responsibility.