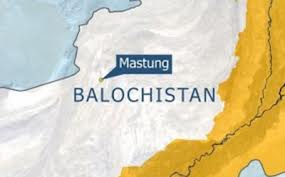 QUETTA, 30 May: Unidentified militants gunned down 20 passengers after alighting them from two vans in Mastung district last night.

The Karachi-bound vans were stopped on gunpoint at Khud Kocha in Mastung district and 25 passengers were got off the vans after checking their national identity cards. Amongst them 20 were shot dead while five were released. Bodies of the slain passengers were shifted to Quetta Civil Hospital. Eyewitnesses put the number of militants at 30, all attired in security forces uniform.

Prime Minister Nawaz Sharif, taking notice of the gory incident, has sought the report of the Mastung bloodshed. On the other hand, the trader community of Quetta has given a call of shutter-down strike to protest the killing of innocent people on Mastung.