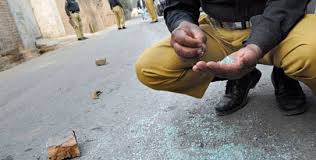 QUETTA, 27 July: Three persons, including a woman and two policemen, were killed as militants attacked the vehicle of Superintendent of Police (SP) Saryab in Kashmirabad area today, police sources said.

SP Saryab Zahoor Afridi was in his official vehicle when two assailants, riding a bike, opened indiscriminate fire, leaving two women injured. However, the SP remained unscathed. They hurt women were being rushed to the hospital when the militants launched another attack, which left a woman and two cops dead. Retaliatory fire by police also killed a militant while the other who sustained bullet injuries managed to flee.

Meanwhile, security forces apprehended three suspected militants during a raid on a house in Panjgor district after exchange for fire. Frontier Corps spokesman told the TNN that the arrested suspects were allegedly involved in attacks on government installations.