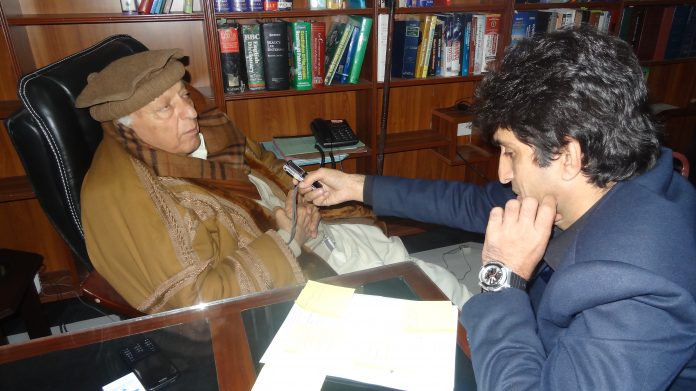 PESHAWAR, December 28: The federal government has introduced an action plan to eliminate terrorism from the country after the terrorist attack on the Army Public School in Peshawar. The establishment of military courts to try terrorists is also part of the National Action Plan (NAP) on counter-terrorism.

TNN: All Parties Conference has decided to establish military courts. What will be the structure and function of these courts?

Latif Afridi: Military courts existed during the reigns of General Ayub and General Ziaul Haq. Special courts were also established in 1991 for three years. Currently, there is no provision or article about military courts in the Constitution of Pakistan. However, the APC or the Parliament after reaching consensus can make amendment in the Constitution in this regard. The government can introduce amendment in the Constitution regarding establishment of special trial court or special court led by an Army officer according to the situation. After the necessary amendment, the government will be able to set up such courts in the country. However, further legislation would be required for the structure and powers of these courts and the role of the federal, provincial governments and Law Department. The law will define parameters for the functioning of these special courts.

TNN: Why the need of military courts is felt now? Has the justice system of our country failed to deliver?

Latif Afridi: All the institutions in our country have failed, except Army. No other institution is working successfully. Judicial activism has been witnessed for last two-three years which is also making some people uncomfortable. Judiciary in a country also functions on the pattern of other institutions. It is impossible for the judiciary to deliver the desired results when other institutions are not functioning. Despite this unfortunate situation, judiciary is far less corrupt than other institutions of the country. We have seen military courts earlier and we don’t expect too much from these courts this time as well. It is a persistent problem and countries like India, UK and Sri Lanka also faced such problems. Therefore, there is need to resolve this problem on permanent basis. The lawmakers sitting in the Parliament must remove the lacunae in the legislation to resolve this problem.

TNN: Will the Parliament forward the terrorism cases to the military courts?

TNN: Is a fair trial possible in military courts?

Latif Afridi: 100 percent justice must be delivered in all the cases. Our leadership must plan towards eradicating the root causes of terrorism and extremism. It is the responsibility of the government to go for permanent solution of the problem. No one has given much attention towards this issue.

TNN: Will the recently established NACTA and other such institutions do the job?

Latif Afridi: All these institutions are useless and ineffective.

TNN: Do we have a definition of a terrorist in our law?

Latif Afridi: There is a very broad definition in the law for terrorism. Article 6 in our law describes it. Many people can be punished under this law if it is implemented in letter and spirit.

TNN: What can be an alternative option for the military courts?

Latif Afridi: Improvement must be made in the laws and conditions must be softened  for the witnesses. Special courts should be set up for this purpose. I am sure these courts will perform better than the military courts.