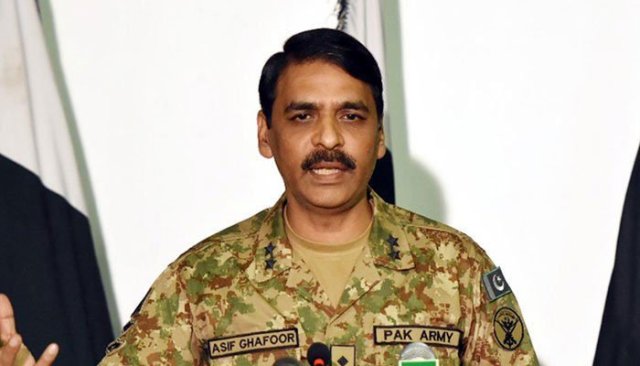 PESHAWAR: Director General Inter-Services Public Relations (ISPR) Major General Asif Ghafoor has said that the military courts were established as a national requirement, not because of Army’s desire.

The DG ISPR said the death sentences were revived under a national consensus. He said 717 cases have arrived in the military courts so far in the last four years out of which 646 have been disposed of. He said cases were transferred to military courts under a transparent system. He made it clear that the issue of the missing persons has no link with the military courts. He said the military courts have created fear among terrorists and a clear message has been given to terror outfits, militants and their handlers that they can be punished.

Asif Ghafoor said the impression that the military courts violated the fundamental right of a fair trial was unfair. He said the suspects are given a due chance to present their version and all the legal requirements are fulfilled.

The DG ISPR said it has to be seen if the criminal justice system of the country has become effective enough to deal with the terrorism cases. He said even the previous extensions to military courts were given by the Parliament and another extension, if required, will also be given by the public representatives. He said military courts were established because the country’s criminal justice system couldn’t effectively deal with the cases of terrorism.

The tenure of military courts, which were established after the heinous terrorist attack on the Army Public School in Peshawar in 2014, will expire in March. Earlier this month, the Law Ministry informed that the summary for a second extension to military courts was forwarded to the cabinet for approval.