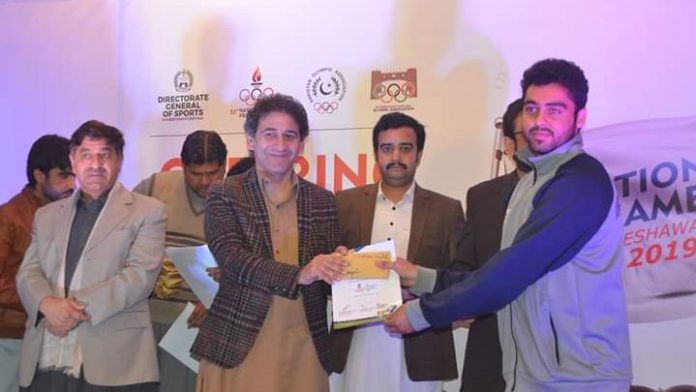 PESHAWAR: Khyber Pakhtunkhwa Senior Minister for Sports and Culture Muhammad Atif Khan on Friday distributed cash prizes among the athletes of the province who won medals in the recently held 33rd National Games.

Rs 200,000 were given to the gold medal winners in the National Games, 100,000 to the Silver and 50,000 to the bronze medal winners. Besides this, it was announced that the government will provide a monthly award to all those players of the province who have secured medals in national games.

Gold medal winners at National Games and Provincial Games will receive Rs 20,000 monthly award, Silver medal recipients get Rs 15,000, while Browns medal recipient will get Rs 10,000 per month with the aim to promote sports and healthy activities in the province.

Speaking at a ceremony held for the medal winners, senior Minister of Sports and culture Muhammad Atif Khan said that the 2019 National Games were the best in history of the country. “I thank the Directorate and the media for the successful conduct of the National Games. It was portrayed Pakistan’s positive image in the world since,” the minister said in his address.

Atif Khan added his department is spending more money on the promotion of sports than other provinces. He revealed that the sports department’s budget in the province is Rs 26 billion and more than 9 billion of these 26 billion are for the tribal districts of the province.

Among the players who received cash prizes and monthly scholarships, including Idris Khan Marwat, who won a silver medal for Khyber Pakhtunkhwa. he was also given a cash prize of Rs 100,000. On this occasion, Atif Khan directed all kinds of cooperation with Idrees Khan to represent the country in international competitions and announced a stipend of Rs. 15,000 each month.

KP has got an overall seventh position as the 33rd National Games. The Pakistan Army won the Quaid-e-Azam Trophy for the 24th time with its top position by securing 7,909 points with 150 gold medals, 134 silver medals and 96 bronze medals. The fair-play trophy of the mega event was also won by KP.