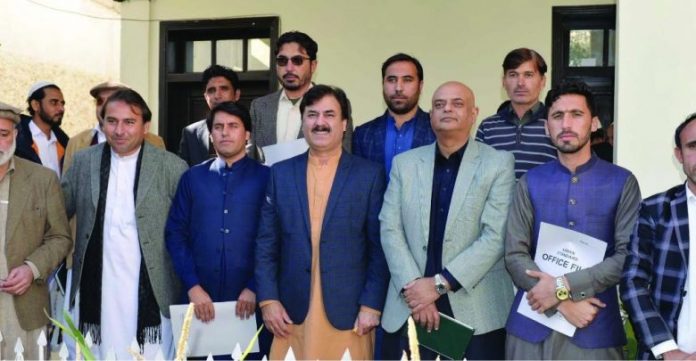 On the occasion, the minister announced a grant of Rs1 million for the press club. The press club president Syed Zahir Shah Afridi and general secretary Arif Afridi presented the traditional tribal turban to the minister as a gift from journalist community.

The minister said the KP government is committed to resolve the problems of journalists and provide them maximum facilities in the whole province, particularly in merged tribal districts. He said journalism is the fourth pillar of the state which needs to the strengthened to strengthen the country. He said journalists play the role of ears and eyes of a society. Therefore, he said, journalists must be facilitated to highlight problems of the people in a positive way.

Shaukat Yousafzai said the government’s cooperation with Jamrud Press Club will continue. He said he expects the journalist community to show the positive image of the region and the country to the world.

‘I’m not feeling comfortable in my ministry’

Shaukat Yousafzai, who is nowadays being trolled for his different interesting statements, says he is not comfortable with this situation as his statements are presented out of context.

Recently, Mr Yousafzai was trolled for his statements about replacement of expensive tomatoes by yogurt, qualification of new education minister, doctors strike and increasing value of dollar.

In an interview, the minister said the media is indulging in cherry-picking over his statements. He said he used to be an agriculture student and he knows that yogurt can be used in place of tomato. He said there was a time when doctors sold ‘pikoras’ as mark of protest and he was referring to that act of doctors in his statement. He also insisted that the BRT Peshawar budget has not been increased and it is completing in time.

Mr Yousafzai said he believes in public service, and his existing ministry is not providing any service to masses directly.