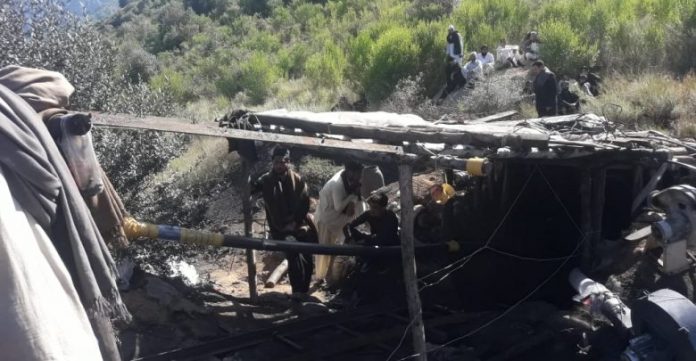 PESHAWAR: Khyber Pakhtunkhwa Minister for Mines and Minerals Dr Amjid Ali has taken notice of the incident in Kalakhel area of Khyber tribal district where a coalmine has caved in.

Dr Amjid Ali said a blast happened in a coalmine in Kalakhel due to accumulation of gas after which the coalmine caved in. The labourers were stranded in the coalmine, two of them lost their lives, while search for the other one was continuing on Monday.

Dr Amjid Ali strict action will be taken against the coalmine owners who put the lives of workers in danger. The coalmine blast happened on Sunday in which two labourers died and another was rescued in injured condition.

The minister directed concerned authorities to initiate an inquiry in the matter and asked authorities to visit the incident site and asses the rescue operation besides making safety arrangements for the mine. He said poor safety measures in coalmines often cause such mishaps.

The Labour Federation leader Haji Amanullah in a recent interview with TNN partly blamed the coalmine workers for their difficulties. He said the Labour Union has agreement with all coalmine contractors under which some facilities are guaranteed for the workers, but the miners still work with contractors with lower remuneration. He said there are some facilities at coalmines in Hyderabad, but the situation is worst in Darra Adamkhel, Hangu and Punjab.

An official of Inspectorate of Mining told TNN on condition of anonymity that the performance of the department is zero. He said awareness about safety measures is vital for the workers. He appealed to the Chief Justice of Pakistan to take suo motu notice of the poor condition of coalmine workers and correct the state of affairs.