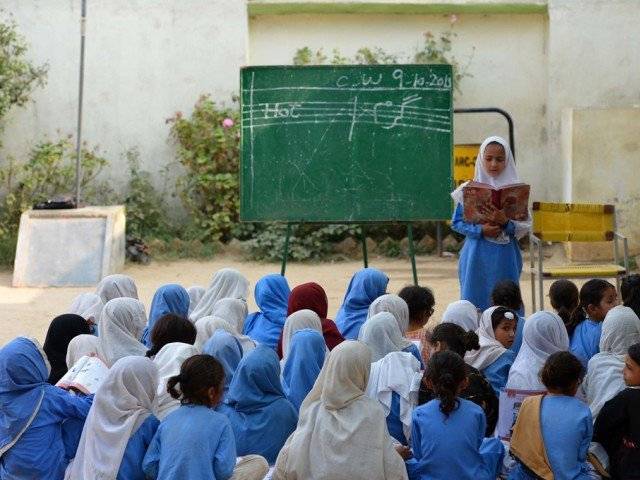 Students belonging to faiths other than Islam have to study the religion of the majority or Islamic studies in violation of the education policy due to which students and their parents are in predicament and asked the government to resolve the issue immediately.

According to the education policy of 2016-17, religious minority’s students will not be forced to study Islamic study as KP Textbook Board has already developed ethics to be taught in the education institutions. But most of the schools haven’t yet implemented this policy.

Such schools also include government girl’s school in Landi Kotal where a number of non-muslim students are studying along with their Muslim fellows but they are being taught Islamic studies leaving the students with no other alternative.

Sawara Masih TNN that even if they wish they can’t refuse to study Islamiyat. Her father Yousuf Masih* was even more worried as he fears that his children may not commit any blunder in reading Islamic verses as they have no knowledge of Islam and have never recited Quran Majeed.

An official of the Khyber Education Department told TNN that it is a very sensitive issue which needs to be addressed without delay by the government. He further explained that once he was visiting a primary school where he heard the students reciting the Arabic prayer which he found as totally wrong. He added that he immediately entered the school and issued a notice to the principal of the school.

When the principal investigated, the official said, it was found that it was the religious Minorities students who were reading Islamic verses as they were unable to learn Arabic. He added that they were never given any books of ethics subject by the education department to provide it to the school in Khyber district.

District Education officer of Khyber Jadoon Wazir also confirmed the reports and that every year they ask schools for the number of religious minorities students and the number of Ethics books they will be needed but, so far, no schools have provided the details.

This issue isn’t just limited to primary and high school students but also prevails at the college level. A social activist Siraj Khan lamented that making religious minorities to learn Islamic teaching is itself against Islam. He added that no force is allowed in Islam and everyone has the right to get an education as for his religion.

Education expert Dr Khadim Husain has said TNN that in 2006 and 2010, two education policies were formed in which it is clearly mentioned that the religious minority’s students will study ethics subject instead of Islamiyat. He lamented that the policies are not being followed and only some schools in cities are provided with ethics books and there is no provision of ethics books in far-flung areas of the province.

The adviser to Chief Minister of education Zia Ullah Bangash has rejected the reports. While talking to TNN he said that schools are provided with all type of books which they demand, however, said that maybe some schools have not made the demand for ethics books for minority’s students.

Anmol, A student of sociology who belongs to the Christian faith said that when she took admission in sociology in university she was told that the department has ethics books but have no teacher available to teach Ethics. Thus she was asked to study Islamiyat instead of ethics. “This is the reason that I have not attempted even a single question is Islamiyat paper in exams,” Anmol told TNN she added that she respects religious Islam but don’t want to attempt the paper by copying as she is unable to learn it. She said that after she was declared failed in the papers, other students went to the teacher and urged him to pass the paper.

Saint John high school’s Zeshan Masih also expressed concern over the lack of implementation of the policy. He added that this issue is not just limited to the government schools and colleges but also in private educational institutions. He added that due to this issue most of the parents don’t send their children to schools while the minority’s students are also weak in learning Islamiyat subject.

He lamented that they have no basic rights available and declared that his leaders and elders are responsible for as they’ve never raised genuine issues on a proper platform but are only struggling to stratify their own interests.