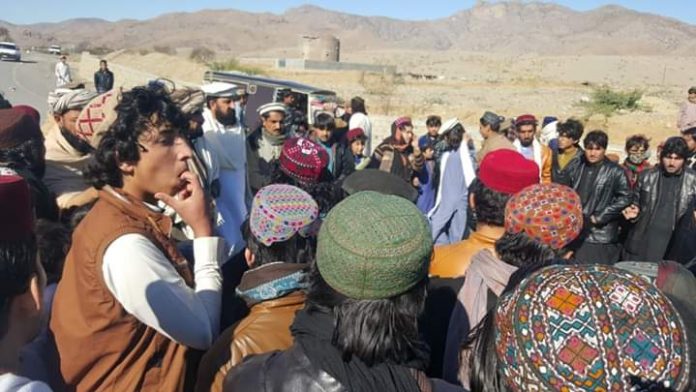 PESHAWAR: The tribal youth are in protest against the murder of tribal elder Abbas Khan who was targeted and killed in an Improvised Explosive Device (IED). A huge number of Marsi Khel area tribesmen gathered, which include youngsters and elders to protest the murder of their elder.

The protestors blocked the Mir Ali to Miran Shah Road and accused the administration to have completely failed to ensure peace and provide security to the people. They demanded the government to start the investigation and arrest all those involved in the murder of Malik Abbas Khan Wazir.

Abbas was killed in Improvised Explosive Device (IED) explosion in tehsil Mir Ali of North Waziristan, said the district administration here on Wednesday. They added that tribal elder, Abbas Khan Wazir was on the way to home when an IED blast, planted on the roadside, hit his vehicles. Due to the blast, he was severely injured and succumbed to injuries on the spot.

The administration said that after the explosion, security forces rushed to the crime spot and cordon off the area to start the search operation. The body of the deceased was shifted to a nearby hospital from where after necessary legal-medical examination, it was handed over to the heirs.

Malik Rimal, an uncle of the deceased Malik Abbas, was injured in an explosion in the same area a few days back when he was coming back to his village after a meeting with the officials of district administration.

Yesterday, one person was injured in a landmine blast in North Waziristan tribal while he was grazing sheep in the fields near his village Tang Gala when he stepped over a landmine, which exploded and injured him critically.

Landmine blasts have claimed several lives in North Waziristan after the return of the temporarily displaced persons (TDPs). The protestors demanded the government to take steps to clean the area from landmines.