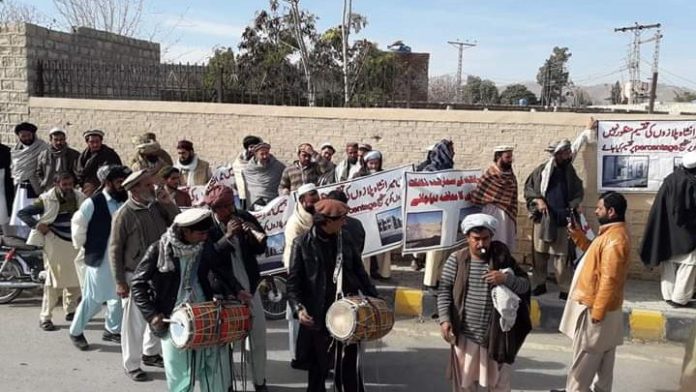 MIRANSHAH: The Shop owners in Miranshah Bazaar have demanded of the government to keep the newly constructed markets closed until a final decision is made about its just distribution and compensation to all those whose businesses were demolished in the war against militants.

The protesting shopkeepers gathered outside the Miranshah Press club on Monday. They performed the Pashtuns’ traditional dance, Atten, to record their protest against the government and district administration for unfair distribution of newly constructed shops in Miranshah bazaar. “The shops in new market have been distributed among blue-eyed ones which isn’t acceptable to us,” protesters accused the administration.

The protesters claimed that over 10000 shops were demolished in Zarb-e-Azab against militancy and now the government have just constructed some 1200 shops and they are too being distributed among the non deserving people.

“We must first be informed where our thousands of shops have gone,” Malik Noor Khan told TNN “Until the issue is resolved, the new markets cannot be opened,” Khan warned that they don’t want to destroy the peace which has been achieved after paying a heavy price, but the peoples whose shops and plazas were destroyed must properly be compensated.

The new market is constructed in Saddar area of Miranshah over the site of old markets which was damaged due to military operations against militants. The protesting tribesmen are worried that they will not be able to get a shop in the new market.

Since the peace is restored and new markets have been constructed, they have the right to be compensated and provided with shops, said Malik Noor “Hundreds of shopkeepers were told that their old shops have come under the roads and parks, therefore, they have lost their right to claim a shop in the newly constructed market,” Noor accused the officials.

The protesters said that the district administration has failed to solve the issue and asked the Chief Justice of Pakistan and Prime Minister Imran Khan to intervene and direct the concerned officials to distribute the shops on merit.