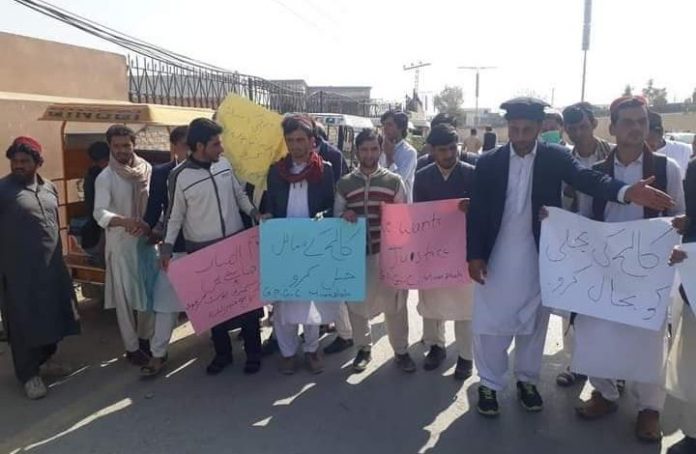 MIRANSHAH: The students of Post Graduate College Miranshah staged a protest demonstration in favour of their demands in Miranshah, the main town of North Waziristan tribal district, on Friday.

The protesting students, who gathered outside Miranshah Press Club, said they are extremely perturbed by excessive power load-shedding in Miranshah College and there is no facility of internet either due to which they are facing difficulties.

The students said Khyber Pakhtunkhwa Chief Minister Mahmood Khan during his visit to Waziristan two years ago announced provision of 3G and 4G internet service, but that announcement remains unimplemented. They said they face difficulties in their academic activities due to lack of basic facilities.

The protesting students said North Waziristan suffered a lot due to militancy and military operations and educational activities have been resumed after a long gap. They said the resumption of normal life became possible in the area due to sacrifices of the local people along with the security forces. They said the students of the area now deserve special focus and facilities to make up for the lost time and excel in the field of education without which no kind of progress is possible.

The students demanded the government to resolve their problems on priority basis. They said the protests will continue till resolution of the issues.

Protest by North Waziristan students came two days after the people of Angoor Adda area of South Waziristan tribal district staged a protest outside the Peshawar Press Club over lack of basic facilities in their area.

The protesters were carrying banners and placards inscribed with slogans in favour of their demands. The protesters said basic facilities of education, healthcare, roads and mobile phone network are not available in their area due to which they are facing a lot of difficulties. They said the problem of prolonged power outages have made the lives of people of the area miserable. They said there is severe shortage of schools and colleges and their children had to go to far-flung areas to acquire higher education.

The protesters also criticised the closure of Pak-Afghan border which had affected their business.