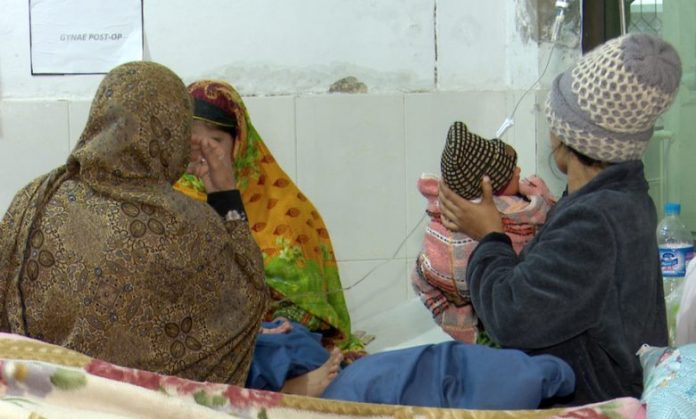 PESHAWAR: A disabled woman from Mardan says she was not aware about complications relating to pregnancy as she was married at a very young age. She says she suffered complications during her first pregnancy and gradually her both legs became so weak that they became unusable.

Nusrat Bibi says she is unable to look after her children due to disability. She says during her first pregnancy, she was never looked after by her in-laws and she was not given appropriate food and medical treatment. She says due to young age, she had no idea how to look after herself. She said her diet was not balanced and she started feeling weakness.

Nusrat Bibi says she came to know very late that lack of proper diet and rest affects the health of mother and child.

“No one in the in-laws, including my husband, were bothered about me and my newborn child, and I continued to perform all household jobs even while having health problems,” she said while talking to TNN.

Shehnaz, a resident of Peshawar, says the health of mother and child is affected mostly in our society as most women don’t have awareness in this regard.

She says daughter-in-laws must also be treated like daughters as they are also human beings and they must not be burdened by their in-laws beyond their capacity, particularly when a woman is pregnant. She says it is the responsibility of in-laws to take care of all needs of a woman during and after pregnancy.

Gynaecologist Dr Naheeda said while talking to TNN that pregnant women must not be overburdened with household jobs and they must be given full time to take rest. She says only a physical and mentally healthy mother can give birth to a healthy child.

Dr Naheeda says early marriage is the main cause behind complications in pregnancy which is dangerous for the health of mother and child. She says expectant mothers must regularly come for medical check-up and use all medicines and food suggested by gynaecologist.

According to a research by a Woman’s View, 95 percent women who die during pregnancy or delivery belong to poor and middle income countries. In our society, many people take pregnancy casually when sometimes result into tragic consequences.

Naila Altaf, a social activist from Kurram tribal district, says a husband is also equally responsible for birth of a child and he must look after his pregnant wife well. She says lack of awareness and lack of access to best medical facilities due to financial constraints are the main reasons behind high mother and infant mortality rate.