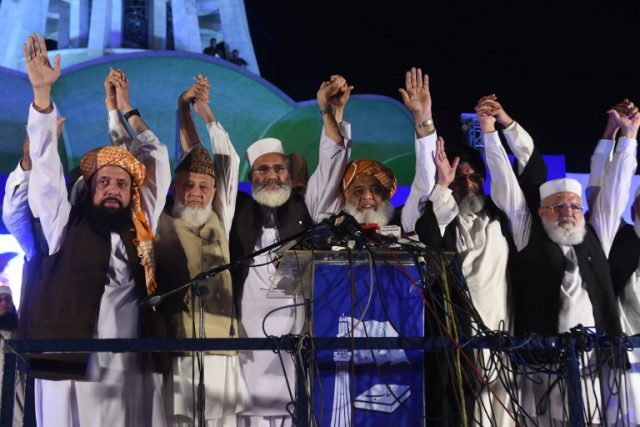 PESHAWAR: The Muttahida Majlis-e-Amal (MMA) on Wednesday announced its final list of candidates for the upcoming general elections scheduled to be held on 25 July.

The MMA President Maulana Fazlur Rehman after chairing the supreme council meeting of the MMA in Islamabad announced candidates for the five-party religious alliance. He announced consensus candidates of the alliance from 191 National Assembly constituencies 404 constituencies of the four provincial assemblies which also include 35 woman candidates.

To resolve the rifts among the MMA component parties, especially the Jamiat Ulema-e-Islam-Fazl (JUI-F) and Jamaat-e-Islami (JI), the supreme council decided to field four candidates each from eight out of 12 National Assembly constituencies from the erstwhile Fata. In Khyber Pakhtunkhwa, the candidates of JI have been awarded tickets from 11 National Assembly constituencies.

The rifts surfaced mainly due to award of most tickets to the JUI-F candidates. Due to reservations on the ticket issue, many JI and JUI-F candidates decided to contest the elections as independents.

Fazlur Rehman said the alliance of religious parties had completed homework to participate in the general elections in an organised manner. He rejected some recent survey reports about the elections, saying that such reports have nothing to do with ground realities.