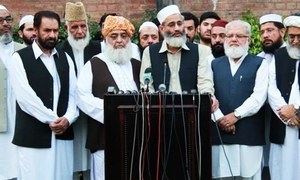 PESHAWAR: The Muttahida Majlis-e-Amal (MMA) President Maulana Fazlur Rehman while rejecting the election results has called for declaring the results null and void.

Addressing a press conference along with other MMA leaders in Islamabad on Thursday, he alleged that the people’s mandate was stolen in the elections. He said the returning officers and presiding officers were kept completely powerless. He said the delay in announcement of results raised many eyebrows.

Referring to the Pakistan Tehreek-e-Insaf (PTI) chief Imran Khan’s victory speech, the Maulana said he heard many such ‘sweet speeches’ but it won’t change his mind to protest against rigging.

Fazlur Rehman said the MMA has called an all parties conference for Friday (today) to decide future course of action after consultations with other parties. He said he would invite the Pakistan People’s Party (PPP) Co-Chairman Asif Ali Zardari to chair the all parties conference, while representatives from the Muttahida Qaumi Movement and Pak Sarzameen Party will also participate in the meeting.

Earlier, the Pakistan Muslim League-Nawaz (PML-N) also rejected the polls results and announced to participate in the MMA’s all parties conference.

The MMA got only 10 each seats in the National and Khyber Pakhtunkhwa Assembly in the 2018 elections. It got eight seats from Balochistan Assembly and none from Punjab Assembly. Fazlur Rehman lost in both his constituencies in Dera Ismail Khan.