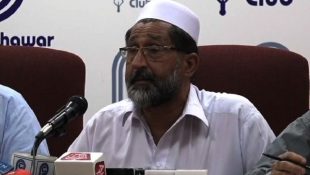 The police said that Noor Zaman was killed when unknown suspects on motorcycles opened fire at him in Tajori town. They said that the attackers were on motorbikes who fled after committing the crime.

Station House Officer Altafur Rehman said that family dispute was the reason the crime. He said that investigation has been launched and refused to comment once the thorough investigations was carried out.

He added that the police have initiated a search for the men nominated in the FIR in order to arrest them.