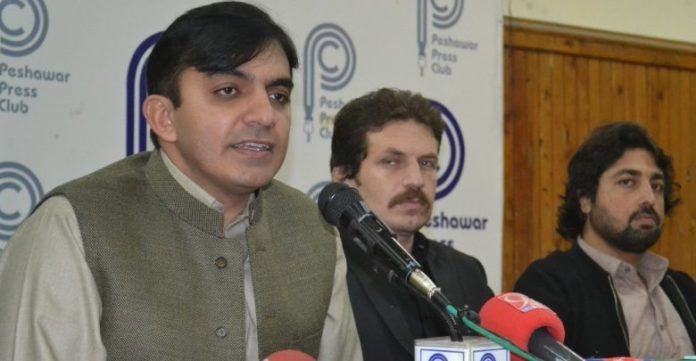 PESHAWAR: Member National Assembly from North Waziristan Mohsin Dawar on Sunday asked the Federal Investigation Agency and KP Police to explain why his and MNA from South Waziristan Ali Wazir names were placed on exit control list and stopped from leaving for Dubai at Bach Khan Incarnation Airport at Peshawar the other day.

He also asked how the and Ali Wazir were arrested without informing speaker National Assembly.

Addressing a press conference here at Peshawar Press Club, he said their names were placed on ECL on basis of a simple FIR in which they were already on bail.

He warned such below the belt actions would further strengthen their resolve.

Talking about registration of an FIR, he said they were booked for organising a peaceful public gathering in Swabi in which they never chanted unconstitutional slogans.

He said that they were offloaded from a plane at Bacha Khan International Airport Peshawar while going to Dubai to participate in a cultural gathering.

He asked to know their crime for which they were arrested without proper legal procedure, adding that placing their names on ECL was an insult of their mandate.

He said that a motion would be submitted at the National Assembly in this regard.

He stressed on elections for local governments as well as for KP Assembly that was only way out to resolve problems of tribal areas and said that Prime Minister Imran Khan had agreed with them in a meeting.

He added they were independent MNAs and there was no bar on them to participate in elections for local government as well as KP Assembly.