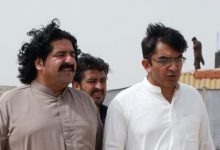 PESHAWAR: The Federal Investigation Authority (FIA) on Friday released MNAs Ali Wazir and Mohsin Dawar, members of National Assembly (MNAs) from Waziristan and leaders of the Pashtun Tahafuz Movement (PTM), after offloading them from a Dubai-bound flight at Bacha Khan International Airport.

Wazir and Dawar were going to Dubai to attend a Pashtun cultural event on an invitation but were barred from leaving the country as their names were found on the Provisional National Identification List (PNIL).

Dawar and Wazir had been nominated in a case registered against them in Swabi.

They were nominated in a case against along with other PTM supporters over various charges, including rioting, after a public meeting of the party in Swabi.

Ali Wazir said that there were hindrances in their way because the PTM’s detractors were now afraid of the growing momentum of the movement.

The PTM emerged as a movement for the ones affected by the war on terror in the tribal areas, mainly South Waziristan.