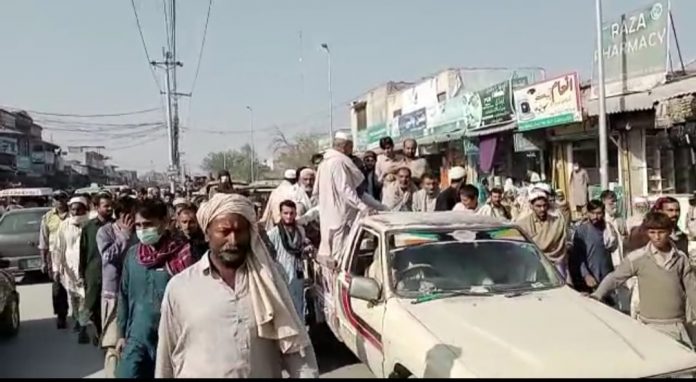 The incident took place in the limits of the City Police station. Police said that disabled person as Salman alias Malang had earlier shot dead his neighbor Shahsawar over a dispute involving pigeons.

Charsadda police spokesperson Safiullah said that the Salman had disagreement with the youth for quite some time and shot him dead on Friday. He said that following the murder, the slain relatives placed his body on the road in protest. He said that protesters later surrounded the house of the accused and set it on fire. He said that police rescued the rest of the family while his mother who was sheltering at the roof was thrown down by the mob. The woman is said to be critically wounded and hospitalized.

Mr Safi said that the mob later burnt alive the accused and when police personnel tried to rescue him, they also beaten up the cops.

He said that SHO city police station Berhamand Khan and three cops also sustained injuries in the incident and were rushed to hospital for treatment.

He said that police has arrested 16 suspects in connection with the violence including the father of slain Shahsawar.

The police spokesperson said that locals have told them that slain person was an Afghan national; however, they have not confirmed it thus far.

However, an official told the TNN that the slain Salman was an Afghan and physically as well as mentally disabled.

KP chief minister Mahmood Khan took notice of the issue and directed the directed the provincial police chief Moazaam Jan Ansari to investigate the incident and arrest the accused. Mr Khan said that no one will be allowed to take law into their hands.