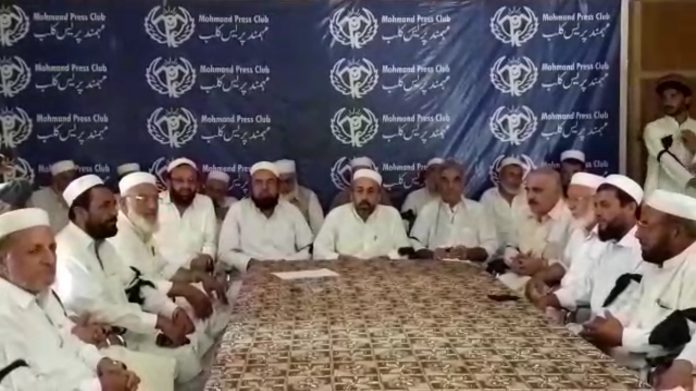 MOHMAND: The tribal elders on Monday warned the government of boycotting the election in Mohmand as, they said, they were not taken in confidence before the tribal districts merger with the province and their demands were not accepted.

“Our Jirgas are underway in every Tehsil to make people boycott the election and the whole nation has expressed the agreement,” said Malik Nadir Manan, who was addressing a press conference along with other tribal elders at Mohmand Press club. “This shows the people of Mohmand are not happy with the decision of merger and want the government to accept their demands.”

Malik Ijaz, Malik Amir Nawaz Khan, Malik Ayaz and other tribal elders were also present during the press conference. Malik Nadir said that they are united to completely boycott the election and want the government to accept their demands. The elders said their agitation is continuing from the day of the merger of tribal districts with the province as they were promised that all the issues would be resolved in consultation with tribal people but now they’ve been totally ignored.

The tribal elders said that they had told the government that not change in the status of the tribal belt should be made until all the IDPs return homes, and they are rehabilitated. He added that tribal elders wanted to be assured the protection of their centuries-old traditions such as Jirga before the merger. But, the tribal elders alleged, the committee has presented the report against the views of tribal people.

The speakers during the press conference said that they will solve their issues through tradition system of Jirga and would avoid the modern courts as getting justice from it is a time-consuming process and also cost too much which tribal people cannot afford due to poverty.

The tribal elders announced that on 25th July, they are going to arrange a grand jirga in Tehsil Safi to express unity and press the government for their rightful demands.