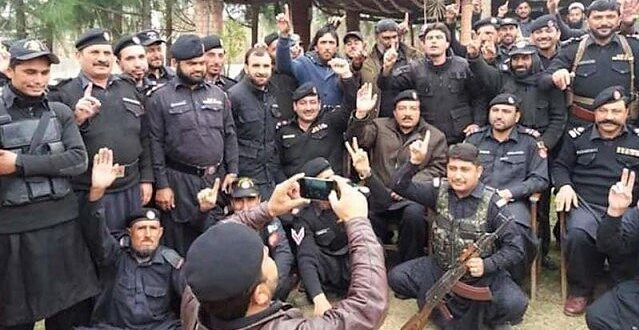 The protesting Khassadars marched from Khyber Pakhtunkhwa Assembly towards Peshawar Press Club and chanted slogans against the government and district administration of Mohmand. The rally was led by founder of Safi Tribe Organisation Sharfuddin, senior leader Malik Israel Safi and others.

Participants of the rally said the services of Khassadar personnel are not hidden from anyone. They said the Khassadars have offered countless sacrifices for the country and will never hesitate to offer more sacrifices. However, they said, their sacrifices are not honoured and they are not being paid salaries for the last 12 years due to which they are facing countless hardships.

The protesting Khassadars said the issue of salaries must be resolved without further delay and their other problems must also be resolved according to promises made by the chief minister. They said action must be taken against those who are ‘looting’ the salaries of Khassadars.

The Khassadar personnel of Mohmand district are staging protest outside the KP Assembly for the last several days.

On the other hand, the members of the Khassadar and Levies forces who were suspended from their service in Bara area of Khyber tribal district are still waiting for their restoration.

Last month, the suspended Khassadar and Levies personnel staged a protest demonstration outside Bara Press Club in favour of their demands.

The protesters said the Levies and Khassadar personnel served the nation even during extremely difficult circumstances and did not even hesitate to sacrifice their lives for peace and security. They said they played the role of font line forces in the war against terrorism. They demanded Khyber Pakhtunkhwa Chief Minister Mehmood Khan, Peshawar Corps Commander and Capital City Police Officer (CCPO) to restore the jobs of suspended Levies and Khassadars in Bara so that they could earn their livelihood.