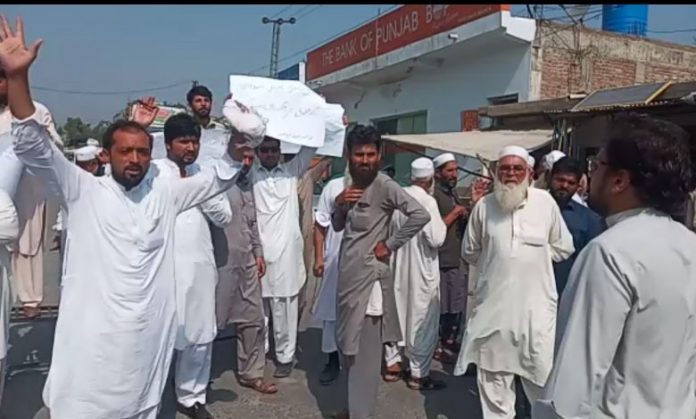 GHALLANAI: The people of Mohmand tribal district on Friday staged a protest demonstration against alleged irregularities in the appointments in the Community Facilitation Centre.

A large number of candidates who failed to get jobs, local social activists and workers of the ruling Pakistan Tehreek-e-Insaf (PTI) participated in the protest in Yakkaghund and blocked Bajaur-Peshawar road for all kinds of traffic due to which the commuters and transporters faced difficulties. The protesters alleged that on 12 available posts, only one candidate in the Community Facilitation Centre has been selected from Mohmand tribal district, while the remaining 11 posts have been filled with non-locals.

The protesters said they will never tolerate this injustice and appointment of non-locals on jobs in Mohmand district will never be allowed. They said the people of Mohmand district have the first right on local jobs. They said the jobs can be given to outsiders only in case no candidates are available in Mohmand, but that is not the case. They said a large number of qualified candidates are available in Mohmand, but almost all jobs are given to outsiders which means that there was massive mismanagement in the appointments. The unsuccessful candidates said appointment on all jobs must be made on the basis of computerised national identity cards (CNICs) instead of domiciles. They said the CNIC is the most authentic verification document for determining the actual address of a candidate, while manoeuvring is possible in making of domiciles. The protesters said they will utilise all options, including approaching the court, for their rights.

The people of Mohmand district have appreciated the opening of facilitation centre. However, they have expressed concern over appointment of non-local people in the centre.