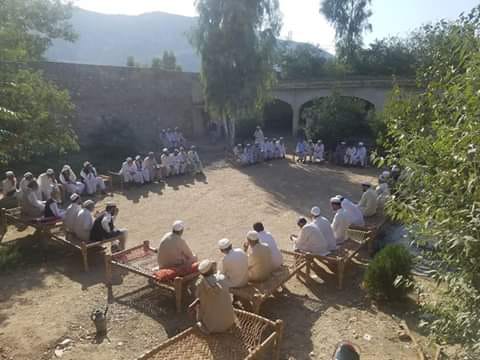 GHALLANAI: Tribal elders in Mohmand tribal district asked the district administration to release seven members of peace lashkar who were arrested on charge of raising lashkar  and publically executing two persons who were involved in the murder of a local man.

The elders said those who were stoned to death were professional killers while the district government says that peace committee took law into their hand and therefore arrested seven person of local peace lashkar.

The elders said that the arrest of seven persons was unjust and said that the whole Momand tribe should be arrested in the case as killing of the two professional killers was their demand.

The district government took notice of the incident and arrested the seven persons. However, local elders said that they were handed over to the administration to avoid clash with the government.

They threatened if the arrested persons, who have been in jail for last one month, not released within a week, they would launch protest drive that will continue till their release.

They also threatened to boycott polio drive and will not vaccinate their children if their demand was not accepted.

It merits a mention here that two professional killers Aman Ali and Sajjad from Peshawar were arrested soon after they killed a local  Sher Rahman in Safi tehsil of Mohmand distict last month.

Subsequently, a local lashkar demolished house of a financer Speen khan and shot dead the two killers in public.