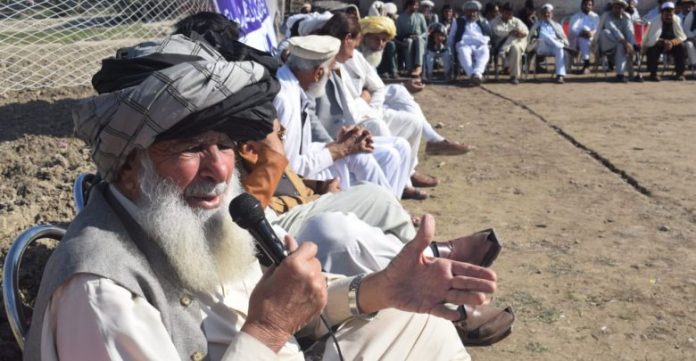 PESHAWAR: Momand Khel tribe elders on Sunday refused to be the part of Baka Khel tehsil and announced to join Bannu Tehsil instead. The decision was taken in a grand jirga where they also called for social boycott of PK-89 constituency MPA, Shah Muhammad Khan.

A Grand Jirga of Mamond Khel was held at Azad Mandi which was organized by Momand Youth Youth Committee, in which tribal leaders and youth participated in large numbers.  Addressing the jirga, Malik Sher Ghali Khan, head of Mohmand Khel, Amir Feroz Khan, Maqbool Khan, Asghar Khan Wazir, former Nazim Mohammad Nawaz, Awal Noor and others said that our leaders have made agreement with Shah Muhammad Khan to be the part of Baka Khel with the promise that Tehsil building will be constructed in Momand Khel area but now the tehsil building is being built in Baka Khel area.

They said that it is not only Tehsil building, but there are a college hospital and millions of rupees fund with it. The jirga unanimously decided that now they want to be the part of Tehsil Bannu instead of Tehsil Baka Khel.

The elders alleged that the MPA was not only doing injustice to them in uplift funds to keep the area backward but now even threatening the jirga members. They claimed that Momand Khel tribe have made him able to reach to the provincial assembly but now he has betrayed the promise and Jirga of elders.

The jirga challenged the MPA to hold a referendum on the establishment of Baka Khel Tehsil. If the decision comes on the establishment of the Baka Khel Tehsil, they will also ready for it. The jirga criticized the district administration and said that if the administration and MPA are not cooperating with them today, the people are with their elders.

“We will not back down from our position,” Assistant Commissioner Muhammad Khattab Khan Sheirani assured the jirga, adding that their demands would reach the authorities, to which the jirga gave a deadline until next Sunday.