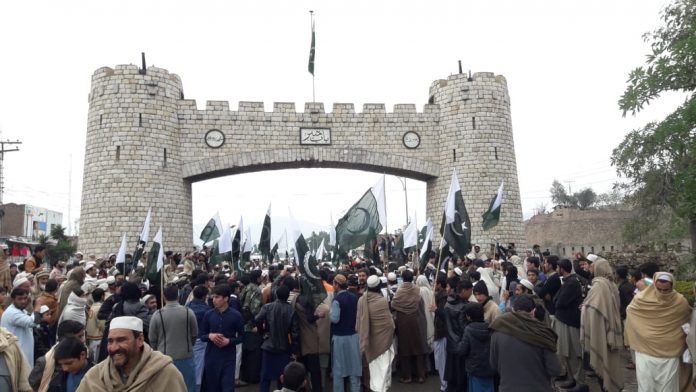 ORAKZAI: The dwellers of Orakzai district took to streets in jubilation to celebrate shooting down of the Indian fighter planes by Pakistan’s Air Force and expressed solidarity with the country’s armed forces here on Friday.

The tribesmen from different walks of life including students, religious scholars and elders participated in the rally which commenced from education complex and culminated at Orakzai scouts forte. A grand jirga which was attended by elders of 18 tribes of the district expressing full confidence for Pakistan’s armed forces.

They vowed to stand united alongside the country’s armed force. Addressing the grand jirga, Brig Shahzad Akram said the entire nation was behind of our valiant security forces and will protect every inch of its motherland.

He said that the country’s armed forces gave tit for tat response to the Indian’s aggression. He also said that Pakistan has successfully crushed terrorism which the enemies could not digest the fact.  He said tribesmen were patriotic citizens of the country and had rendered supreme sacrifices for the sake of the peace in the country.

LAKI MARWAT: On the call of All parties alliance, different rallies were taken out from different parts of the district in Support of Pakistan army. They slammed Narendra Modi for aggression against Pakistan and vowed that they will also stand by their armed forces. The rallies were held in Sare-e-Norang, Kundi Chowk, and Laki Marwat City in which hundreds of people participated. Leaders of different parties addressed the rallies and expressed their unconditional support for the armed forces against any foreign aggression. 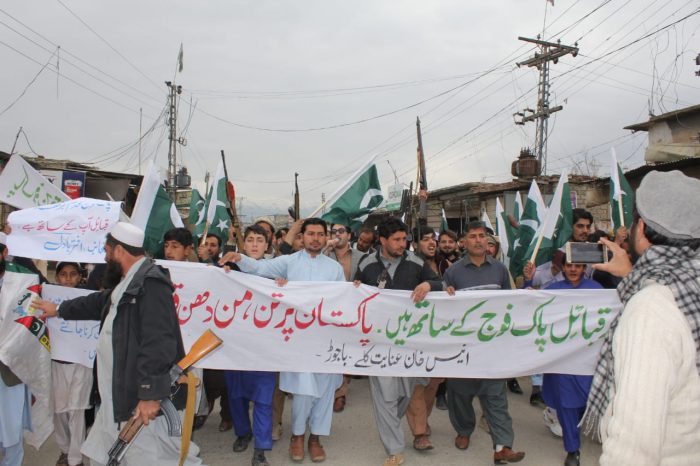 BAJAUR: Large numbers of people participated in the anti-India rallies in Bajaur tribal districts held on Friday. The rallies were organized by different political, religious, traders and transporters organisations ware held in several areas of the district.

The main three big processions ware held in Inayat Kalli bazaar, one of the busy trade centre of the district, in which hundreds of people participated. The protesters who holding Pakistani Flags, banners and placards inscribed with slogans against India and support of security forces have passed from several areas before gathered at bypass road.

The protesters chanted slogans against India for violating the Pakistani territory. They also chanted slogans in support of security forces and Pakistan Air force for shooting down two Indian fighters plans while violating the Pakistani airspace. The participants pledged to stand shoulder to shoulder with security forces to protect the country from all sort of aggression.

A Rally was also held at tehsil Prang of district Mohmand and flayed Indian government of waging a new war in the region. They were holding Pakistani flags and vowed that they will never hesitate from any sacrifices of the stability of the country.