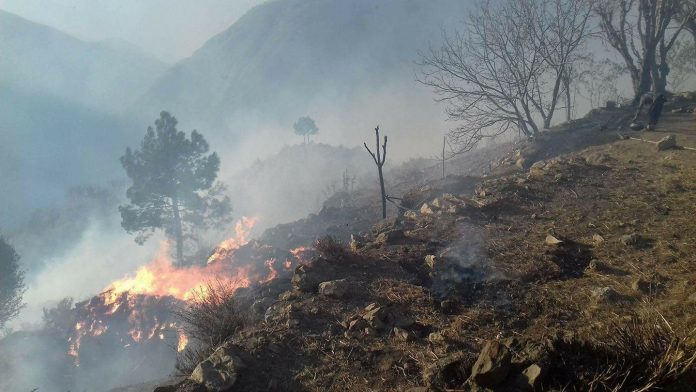 PESHAWAR: “As per initial reports over 100,000 trees were burned down due to the recent fires in different forests of the province,” said officials of the Billion Tree Tsunami Project while talking with media on Tuesday.

The officials added that it is just 0.001 per cent of the total 1.2 billion trees planted during the billion tree tsunami project and assured that it will be recovered in the coming Monsoon season’s extensive plantation.

Talking about the fire, the officials said that the fire flared up due to extreme hot weather conditions. Some 50 per cent of the total affected area was covered by Chir Pine forests which are a natural phenomenon however the rest for incidents occurred in other parts of the forest area.

The BTTP officials claimed that there is no risk for the loss of forest cover in the burned area as it will naturally as well as through vigorous plantation. Around 25 individuals were injured during the fire eruption and the survey was in progress to ascertain the true situation.

“As many as 90 forest fire incidents in the woods located at different mountains have been reported. However, six people have perished in the fires reported in the past years,” said the BTTP officials.

The first wildfire was reported on three parts of Karamar Mountain top. There is huge government machinery present in the area but due to the mountainous region, it couldn’t reach the mountain top.

Nine helicopters of Pakistan army’s aviation wing has also participated and sprayed water that has helped in controlling the bush fire. The rescue 1122 has said that the cadet college has completely been made safe from the fire and now three fire extinguishers have been stationed there to avoid an emergency situation. The was finally extinguished after a days-long struggle of Rescue1122 and local people

The fire incidents were also reported from Dera Ismail Khan, Takht-e-Bhai in Mardan, Lakki Marwat and other areas of the province.