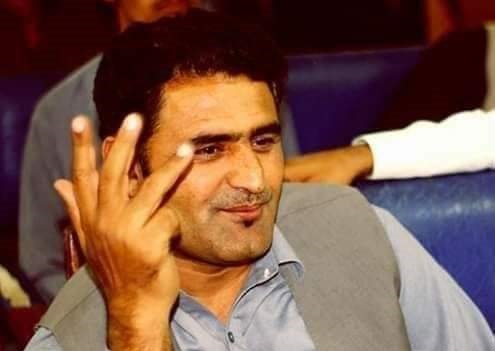 PESHAWAR: A call attention notice has been submitted in the Khyber Pakhtunkhwa (KP) Assembly seeking the house to discuss the ‘Extrajudicial killing’ of Muhammad Ibrahim Arman Luni in Loralai, Balochistan.

Arman Luni, a senior member of the Pashtun Tahafuz Movement (PTM) and a college lecturer was ‘murdered’ on February 2. He was a key leader of four-day sit-in protest in Loralai that began after at least eight people were killed in a militant attack on police recruitment exam in Loralai city on January 29.

The call attention notice was submitted on Monday by Ahmad Kundi, a Member Provincial Assembly of Pakistan People’s Party from Dera Ismail Khan, to discuss the situation after the ‘murder’ of the college lecturer during peaceful set-in.

The MPA alleged that the activist was allegedly tortured to death by the officials of the Balochistan Police during a peaceful protest. Kundi further went on to say that the killing of a peaceful protester will further deteriorate the security situation in the country, especially in the Balochistan province. Therefore, he said, it is important to discuss the situation and stop the human rights violations in the country.

According to a notification issued on Monday, the session of Khyber Pakhtunkhwa Assembly has been summoned on February 6. The proceeding will be started 9:00 am at Provincial Assembly, Khyber road Peshawar.

During the session, Kundi would be given chance to read out the call attention notice, he has submitted and will be referred by the speaker of the assembly to ministers to explain the situation.

Balochistan’s interior minister has told the media “initial investigation suggests Arman Luni died of a cardiac arrest.” A doctor of District Headquarter hospital also said that “He has not found any signs of torture.” However, eyewitnesses and leadership of Pakhtun Tahafuz movement alleged that a police officer struck Amran on the neck with a gun after stopping him as he returned from a sit-in protest in the Loralai district of Balochistan on February 2.

The Pashtunkhwa Milli Awami Party (PkMAP), a Pashtun nationalist party, called the general strike after Arman was laid to rest in Qillah Saifullah. The Province’s lawyers backed the call to protest the death of the senior member of PTM, due to which businesses in Quetta, were closed on February 4, with shops shuttered and padlocked.