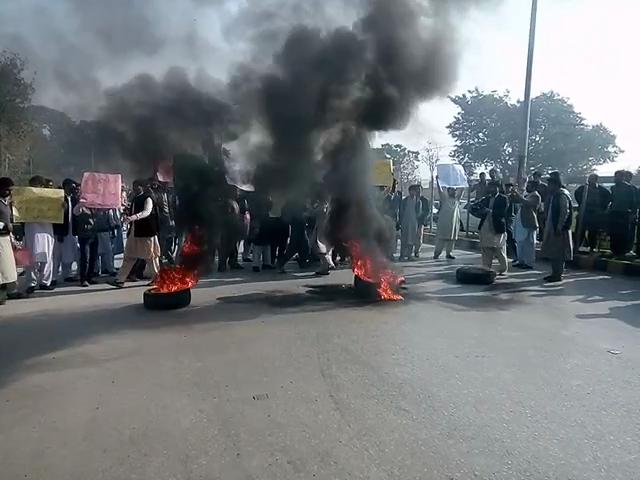 PESHAWAR, 06 December: Muslim Students Federation (MSF) of the Islamia College University (ICU) on Tuesday staged a protest demonstration against the vice chancellor and demanded his removal from the government.

The students, affiliated with PMLN, blocked the main University road for traffic to register their protest against the ICU administration. General public suffered a lot due to the students’ protest as love queues of vehicles could be seen on the University road.

The protesting students alleged that the incumbent vice chancellor was involved in financial corruption and he has lost the moral authority to hold the office.

They also criticized the vice chancellor for banning the MSF and termed it unlawful and unconstitutional.

A protesting student Ahmad told TNN that they were holding a peaceful protest inside the university and police came and baton charged them. He added that police also arrested some of their fellow students and put a ban on the students’ wing.

He demanded that the arrested students should be released at the earliest while the ban on MSF should also be lifted.

Police later forcibly dispersed the students and cleared the road for vehicular traffic. Police also arrested a few students from the spot.

Meanwhile, a spokesman of the university said that a leader of the MSF was expelled from the university on the recommendation of disciplinary committee. The spokesman added that the said student was also charged in a number of FIRs in past.

It merits a mention here that the Khyber Pakhtunkhwa Ehtesab Commission has filed a corruption case against the sitting vice chancellor, director students’ affairs and provost of the Islamia College University on charges of illegal appointment and embezzlement in procurement for the university. However, the Peshawar High Court has restrained the Ehtesab Commission from arresting the other university officials.