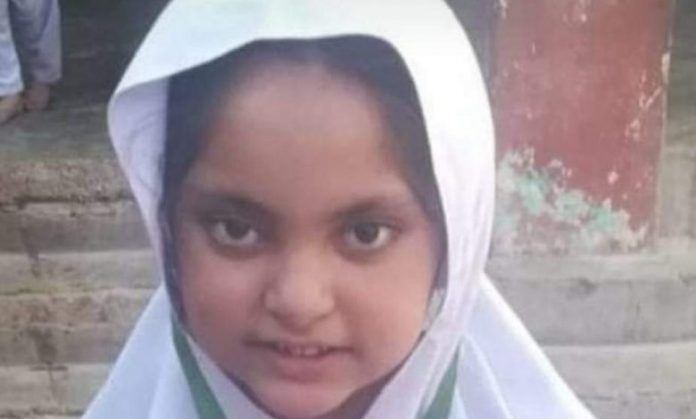 PESHAWAR: The alleged murderer of a seven-year-old girl in Peshawar has been arrested by police from Khyber tribal district.

Badhber Police Station Peshawar officials said the local elders in Bazaar Zakhakhel in Khyber tribal district nabbed the alleged murderer and handed him over to police. The accused is a neighbour of the victim girl who had escaped after killing her in Peshawar.

A police team was sent to Khyber district to bring the accused to Peshawar. The little girl after being given a Rs10 note from her grandfather had gone out of home to buy candies from a shop on November 21 when she was killed and her body was set on fire.

A video of the accused has also surfaced on the social media in which he is confessing killing the girl, setting her body on fire and then throwing the remains in a graveyard. The accused admits during the video that the victim girl was his cousin and he killed her over family enmity.

The burnt body of the girl was found in a graveyard of Badhber, a day after she went missing. The residents of the area staged a massive protest against the incident and blocked the main Kohat Road for several hours. They dispersed in the evening after senior police officials assured them of the early arrest of the culprits.

Senior Superintendent of Police (SSP) Operations Mansoor Aman had said police swung into action soon after the girl’s disappearance was reported. Local sources said the body was spotted by a gravedigger in the graveyard.

Peshawar Police officials have claimed arresting the head of a gang involved in manufacturing counterfeit coins in the metropolis.

Superintendent Police (SP) City told media that a suspected gang leader has been arrested while shifting the factory from Mattani village.

The police officer said that fake Rs5 coins and machinery were recovered from the possession of the suspect. He said the suspected criminal has shown the process of manufacturing counterfeit coins while being in the custody of police officials.

A case has been registered against the suspect under sections of the Currency Act and further investigation is underway.