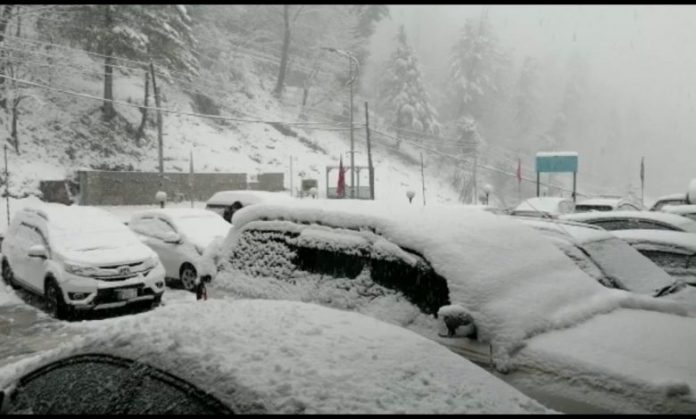 Punjab government on Saturday declared Murree as calamity hit area following 21 tourists froze to death in their stranded cars due to heavy snowfall.

The incident took place as thousands of the tourists from across the country descended on the hill station. Hundreds of vehicles remained stranded on roads with the shivering families inside, waiting to be rescued.

Roads in hill stations of Murree and Galiyat were closed due to the heavy snowfall.

Federal Interior Minister Sheikh Rashid Ahmed said that 16 to 19 tourists died due to extreme cold. He said that a large number of tourists were stranded in about 1000 cars on snow covered roads. He said that authorities have launched rescue operations in the area.

Mr Rashid said that authorities have closed down roads leading to the hill stations. “Only vehicles carrying medicines, blankets and edibles will be allowed to proceed towards the Murree,” he said.

Mr Rashid said that army and Rangers have been called for the help of civil administration.

Murree control room said that more than 100,000 vehicles entered the hill stations during the current spell. Many of them left after parking their cars on roads.

Among the dead was Naveed Iqbal, an official of Islamabad police who died along with six members of his family.

Situation in Galiyat area of KP

Galiyat Development Authority’s spokesperson Ahsan Hameed Durrnai said that the area has received heavy snowfall. He said that the snowfall was still going on.

Mr Durrani said that snowfall has entered its sixth day and accumulated several feet of snow on roads.

He said that they were facing problems in clearing roads.

Mr Durrani also asked the tourists to stay in their hotels. He said that they would be not charged for food and lodging.

“We are striving to open roads as soon as possible,” he said.