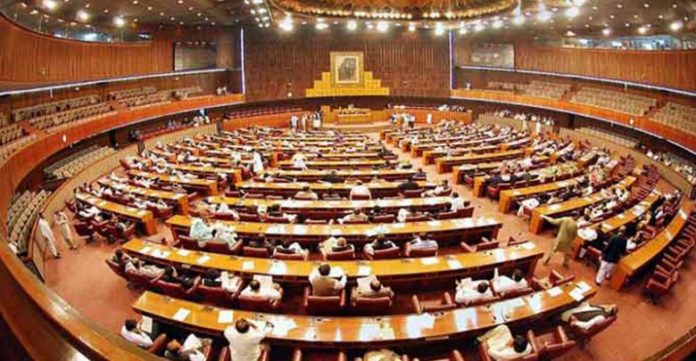 PESHAWAR: Pakistan’s lower house of the parliament on Friday passed a non binding resolution calling for public hanging of culprits involved in sexual abuse and murder of children.

The session of the National Assembly was chaired by Deputy Speaker Qasim Suri. The resolution for public hanging of children sexual abuse and murder culprits was presented by Minister for Parliamentary Affairs Ali Muhammad Khan which was approved with majority.

The resolution stated that those involved in the heinous crime of sexual abuse and murder of children must be hanged publicly. However, the Pakistan People’s Party (PPP) did not agree to public hanging and did not support the resolution.

The PPP lawmaker and former prime minister Raja Pervaiz Ashraf said public hanging is not allowed under the United Nations laws. He was of the opinion that crimes cannot be controlled just be increasing the punishment degree.

The House also condemned the incident of sexual abuse and murder of eight-year-old girl in Nowshera.

Ali Muhammad Khan said the government has taken steps for protection of children from different abuses. He said a child protection center has also been established in Islamabad, besides enactment of laws such as Zainab Alert, Response and Recovery Act. He said those involved in child abuse must be given exemplary punishments.

Parliamentary Secretary for Finance Zain Qureshi said domestic consumers in Malakand Division have been exempted of sales and income tax in utility bills up to 2023. He said the tax is applicable to the industries of Malakand Division.

Minister of State for States and Frontier Regions (Safron) Shaharyar Khan Afridi said the government has introduced anti-narcotics policy to check the menace of drug abuse. He said a “Zindagi App” has also been launched to create awareness amongst the youth about the hazards of the narcotics.

The session of the National Assembly was later adjourned till Monday.

Incidents of children sexual abuse are increasing in the country, particularly in Khyber Pakhtunkhwa, and people are demanding strictest punishment to culprits involved in such crimes.

The Khyber Pakhtunkhwa Assembly has also formed a committee to file recommendations for measures to stop the increasing incidents of children sexual abuse.