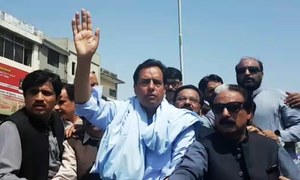 Two high-rank NAB officials took Safdar into custody after he appeared at a party rally in Rawalpindi where thousands of people were around the vehicle in which the NAB officials accompanied the former prime minister’s son-in-law.

After reaching the election office of PML-N leader Hanif Abbasi, Safdar Awan was officially arrested and shifted into the vehicle of NAB team. NAB officials said that Safdar has now been taken to the authority’s office in Islamabad.

Accountability Court in Islamabad on Friday sentenced Safdar, along with wife Maryam and father-in-law Nawaz Sharif, was given in the Avenfield properties case. Nawaz and Maryam were sentenced to 11 and eight years in prison and slapped £8-million and £2-million fines, respectively. Capt (retd) Safdar also received a one-year prison sentence.