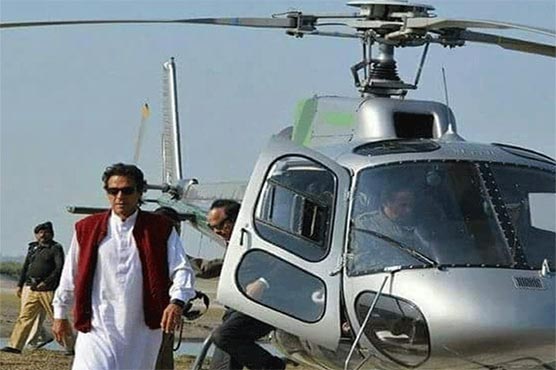 PESHAWAR: The National Accountability Bureau (NAB) Khyber Pakhtunkhwa has summoned the Pakistan Tehreek-e-Insaf (PTI) Chairman Imran Khan on 7 August in a case pertaining to alleged misuse of helicopters of the provincial government.

The NAB officials said Imran Khan used two helicopters of the provincial government for 74 hours. The PTI chief is facing allegation of illegally using an Mi-17 and an Ecureuil helicopters of the KP government, causing a loss of Rs2.1 million to the national exchequer. The Bureau says that Imran Khan paid Rs2.1 million for using the helicopters however; if he had used a private company’s choppers, it would have cost him an hourly fare of between Rs1m and Rs1.2m for the Mi-17, and between Rs0.5m and Rs0.6m for the Ecureuil.

The officials said the statements of former KP chief minister Pervaiz Khattak and aviation officials have already been recorded in this case.

Imran Khan was earlier summoned in the case on 18 July, but he sought delay in hearing due to his election campaign engagements.

The PTI chief maintains that these helicopters were used for official tours, and not for personal use.