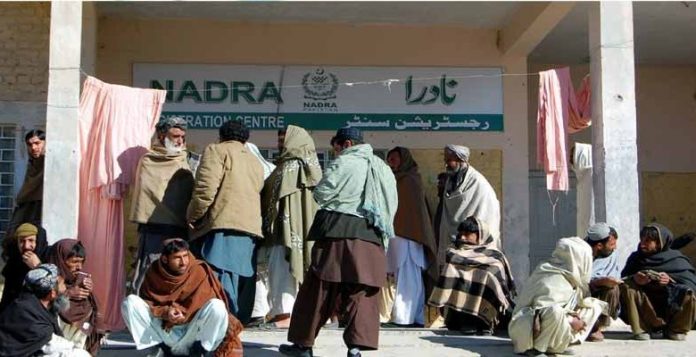 National Database and Registration Authority (NADRA) failure to make its Mattani center functional is forcing locals to travel to provincial capital for getting their identity cards.

Mattani locals said that though the authority has rented space in the town for its house; however, not showing interesting making it functional. They said that this failure to make this space functional was forcing them to travel over 30 kilometers to reach the city for getting their identity papers.

Arshad Khan, a Mattani resident told TNN that he has rented his house to the authority for setting up its Mattani office. Mr Khan said that the office was ready in all respect; however, the authority has not assigned personnel to run it.

He said that due to this, locals were forced to go to Peshawar for getting their identity cards.

Mr Khan said that Matttani town comprised of six union councils and had a population of over 32,000. However, he said that this population, particularly women were facing problems due to absence of NADRA office.

He said that they have also approached NADRA regional office in this regard; however, no progress was made.

Mr Khan said that earlier authority’s officials had visited the Mattani for setting up its office in town.

He said that though there was an authority office located in Badhbher; however, they have to wait for hours for their turns. Mr Khan said due to this they prefer to go to NADRA center located in Deans Towers, more than 32 kilometers away.

Women facing problems due to absence of NADRA center

Mr Khan said that females were facing great problems due to this non-functional center. He said that after traveling to Peshawar, women have to wait for several hours for their turn with their babies. However, he said that many a times, NADRA center closes down before their turn, forcing them to return home empty handed.

Since a large number of women cannot keep going back to Peshawar; therefore, they have been left without identity cards, he said.

He said that only those who desperately need identity cards go to Peshawar, while others prefer to go without identity papers.

Mr Khan said that a large number of people from the area were unable to poll their votes for not having identity cards.

He said that there were 11,000 registered voters at a village council; however, only 1700 of them cast their votes in the recent local bodies’ polls.

Locals said that people with expired and blocked cards could not visit to Peshawar for getting their identity papers.

When approached for comments, NADRA operation and human resources branch refused to talk on the subject.

However, sources in the NADRA said that there were few authority offices as compared to population. They said that the situation was particularly bad in rural and tribal areas.

The sources said that if HR and operations branch pays attention, then the issues could be resolved within a month.

On the other hand, Mattani people have demanded the authority to immediately open its branch in town.