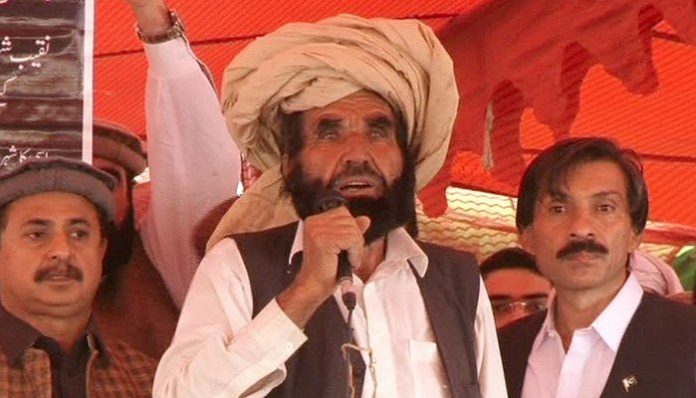 WANA: The father of Naqeebullah Mehsud has rejected the rumours circulating in the social media about accepting compensation for the death of his son and vowed to take the case to its logical end.

Addressing a press conference in South Waziristan, Muhammad Khan, the father of Naqeebullah, Mehsud, who was killed in a fake encounter in Karachi, said he is still waiting for fulfilment of promises of justice for his slain son. He said the Chief Justice of Pakistan and Army Chief had assured him that he will get justice.

Muhammad Khan said he is demanding justice while fully remaining under the circle of the law and Constitution. He said there is no truth in the rumours that he has accepted compensation for his son’s death. He said the Mehsud tribe has decided that the case of Naqeebullah Mehsud will be fought till its logical conclusion and no compromise will be made over the matter. He said if anyone proved accepting compensation money on him then he is prepared for any kind of punishment by his tribe. He said he is hopeful of getting justice from the court.

A Jirga member Maulana Aisamuddin said the death anniversary of Naqeebullah Mehsud will be observed throughout the country on 19 January.

An inquiry team formed after widespread protests over the extrajudicial murder of Naqeebullah Mehsud had found that Naqeeb was killed in a fake encounter on 13 January and then SSP Malir Rao Anwar was stated to be the mastermind of the encounter. The high-level inquiry also concluded that the deceased 27-year-old man from South Waziristan had no militant tendencies.