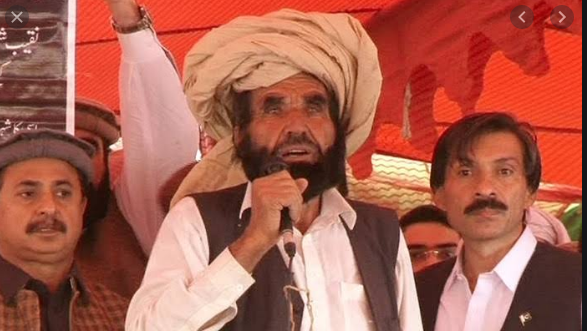 PESHAWAR: Muhammad Khan, father of late Naqibullah Mehsud from South Waziristan who was killed during a ‘fake’ police encounter in Karachi, died on Monday. According to family sources, he was suffering from cancer and was under treatment Combined Military Hospital (CMH) Rawalpindi for the last six to seven months.

According to sources, he will be buried in Makin area.

Remember that in January 2018, 27-year-old Naqibullah, from South Waziristan, was killed in an alleged police encounter by SSP Rao Anwar. Police claimed that four terrorists, who belonged to banned Tehreek-e-Taliban Pakistan (TTP), were killed during a confrontation in Usman Khas Khalil Goth in Shah Latif Town.

SSP Malir Rao Anwar was alleged at the time that those killed in the police encounter were involved in major terrorist incidents and were linked to Lashkar-e-Jhangvi militant group. After the incident, a close relative of Naqibullah denied the police controversial statement, saying the victim was, in fact, a shop owner and fond of modelling.

A close relative of Naqibullah had reported that in January, Naqibullah was allegedly picked up by a simple clothes man from a clothing store at Sohrab Goth, while on January 13, it was discovered that he had been killed in the encounter.

“Tax on wood for domestic use not acceptable”

MOHMAND: In the tribal district of Mohmand, elders of the area protested against the tax imposed on firewood by the Forest Department at the Sherman Khan check post. During the protest, the protesters closed the Bajaur main highway for some time, causing severe problems for the passengers.

The protestors said that tax is wood isn’t acceptable for domestic use which they bring from the settled area to Mohmand District. The protestors said the government is running a campaign to bring back IDPs, while on the other hand, when the victims bring timber from the settled area to their homes, they are taxed, which is injustice with tribal people.

Demonstrators said that at the time of the merger, the government was making false promises that no tax would be levied on tribal people for five years but now they are imposing taxes on tribal people.