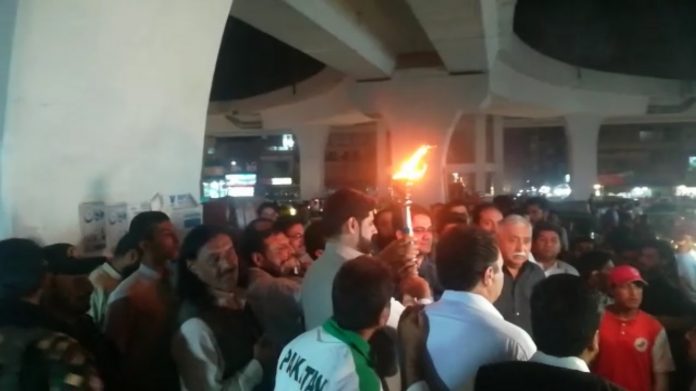 PESHAWAR: The Olympic Torch Relay of the 33rd National Games of Pakistan has arrived here in Peshawar, the host city, after completion of the journey of the whole country. From Peshawar, the torch relay of national games will now be taken to tribal districts of the province.

The No.1 Ranking National Squash Player, Farhan Mehboob received the torch and then handed it over to Director General (DG) Sports Khyber Pakhtunkhwa, Asfandyar Khattak during a reception organized near historic Bala Hisar Fort.

The Olympic Torch Relay of the 33rd National Games begun from the Mazar-e-Quaid, Karachi on October 6, 2019, from where it reached Quetta and then after passing through Lahore and Islamabad reached Gilgit-Baltistan and on October 19 it was handed to the president of KP Olympic Association, Syed Aqil Shah at the tourist spot Naran and then it was received by the Olympian Boxer Captain Arshad Hussain and after passing through different international players it entered Khyber Pakhtunkhwa.

The second stop of the torch relay was Abbottabad where it was received by Olympian Muddasir, who handed it over to Speaker, KP Assembly Mushtaq Ahmad Ghani.

On this occasion, a function was also organized at Jalal Baba Auditorium wherein the local singers of Hazara performed and then the next stop of the torch relay was Attock where the National Cycling Champion, Mohsin Khan handed it over to Squash legend, Qamar Zaman in the presence of Secretary, Sports, Culture and Tourism. Kamran Rehman, DG Sports Asfandyar Khattak and other government officials.

Speaking on the occasion, Qamar Zaman said that the holding of National Games in Peshawar is an honour for them and now the world should know that Pakistan is a peaceful country. Similarly, the DG Sports said that this time the theme of the National Games is the promotion of tourism and culture and they are ready hosting outstanding and exemplary games.