PESHAWAR: The national tribal rights Jirga on post-merger situation on Saturday presented 12-point charter of demands to the government and warned of sit-in in Islamabad if these demands were not accepted.

The main demand of the Jirga held at Nishtar Hall Peshawar pertains to 3 percent share in the National Finance Commission (NFC) Award as promised by the government during the time of merger of erstwhile Fata with Khyber Pakhtunkhwa. The Jirga demanded that 3 percent share in the NFC Award must be provided immediately besides other funds.

The Jirga participants took strong exception to the Mines and Minerals Act of the KP Assembly and demanded the government to revisit it to remove the reservations of people.

The government was asked to continue with the 10-year transitional and special concessions and indemnity package especially regarding health, education, taxation, quotas, employment and legal framework for Levies/Khassadars/Police as agreed in the Sartaj Aziz committee report.

The Jirga participants said tribal districts must get priority in the national development program and donor agencies must also be facilitated in these areas. They said the government must form an advisory committee comprising parliamentarians and technocrats to oversee implementation of development and reforms process. 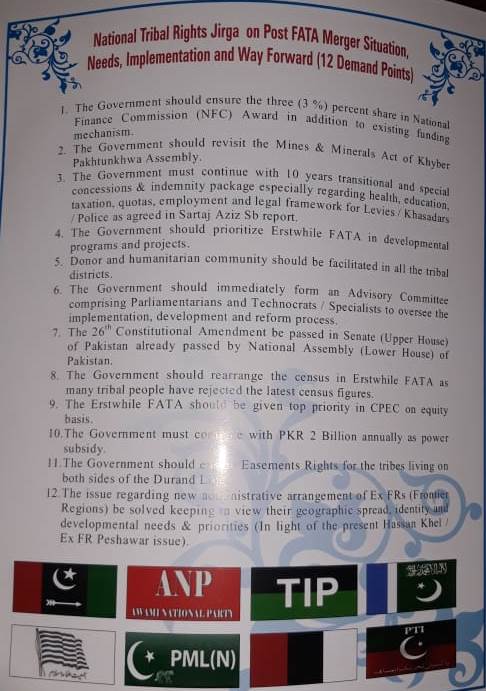 The Jirga also rejected the population census in erstwhile Fata and demanded a fresh census in the area. They said the figures of the census were highly controversial and unacceptable to tribal people.

A demand was also made in the charter of demands about priority to merged districts in China-Pakistan Economic Corridor (CPEC) as these areas suffered a lot during militancy and military operations. It said erstwhile Fata must be given Rs2 billion subsidy in power bills, and tribes living on both sides of Durand Line must be facilitated for easy cross-border movement. It said the administrative issues of former frontier regions (FRs) must also be resolved on priority basis.

Former MNA Al-Haaj Shah Jee Gul Afridi said while talking to TNN before the Jirga that the PTI government has failed to provide benefits of the merger to people of merged districts. He said the government wastes no time in introducing harsh measures for people, and delays those steps which can benefit the people. He said the Jirga is the first step and people from all parts of merged districts will march on Islamabad if their demands were not accepted.