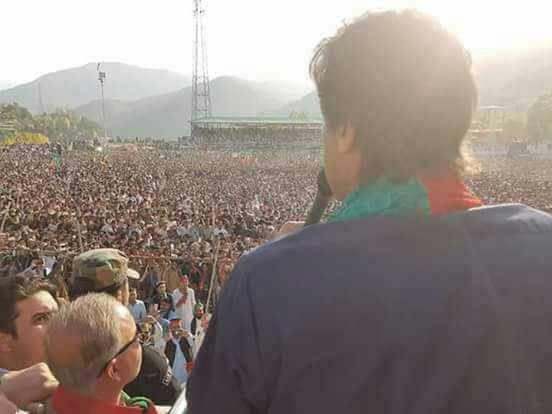 DIR, 27 October: Chairman, Pakistan Tehreek-e-Insaf (PTI), Imran Khan has said that has alleged that Nawaz Sharif and Asif Zardari have looted the country and brought it to the brink of bankruptcy.

Addressing a huge public meeting here on Friday, the PTI leader said that class-based system and violation of merit were the main hindrances in the development of the country.

“There are different set of rules for the rich and the poor. Little thieves are sent to jail but the big fishes get VIP protocol. The PTI, if voted to power, will make Naya Pakistan where there is justice and merit-based system. We will build such a system in which an ordinary citizen can become the Prime Minister of the country,” he said.

He also came down hard on JUIF’s chief Maulana Fazal ur Rahman and said he along with Nawaz Sharif had played havoc with the country.

Imran Khan hoped that the people of Pakistan would make the corrupt politicians accountable in the 2018 general elections.