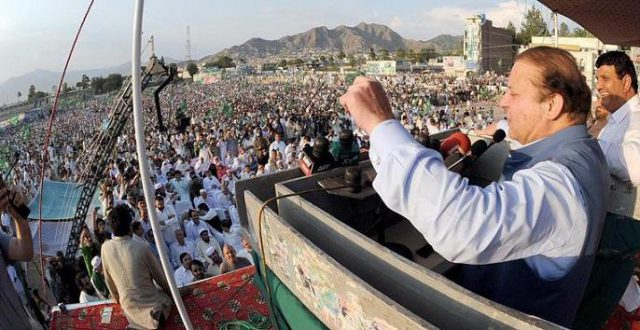 ABBOTTABAD: Ousted prime minister Nawaz Sharif said on Sunday that those who have been dreaming “minus Nawaz” formula should not forget that Nawaz has become name of an ideology.

He said that he has brought his review petition (in the Panama Papers case) to the people asking them to decide his appeal and give a decision that could echo far and wide.

The former PM was addressing a public gathering of the Pakistan Muslim League-Nawaz (PML-N) at the Abbottabad College Ground.

He said that he was not scared of jail or death and asked his workers to promise that they would march together towards destination. “Don’t sit at home, we will walk together and change Pakistan’s destiny,” he said.

Terming the Panama case “Panama Tamasha”, he said that a petition that was dismissed earlier was later admitted to drag him and his family through the courts.

Nawaz said one day the JIT’s story will be uncovered before the world, adding that they toured the world but didn’t find any iota of corruption against him.