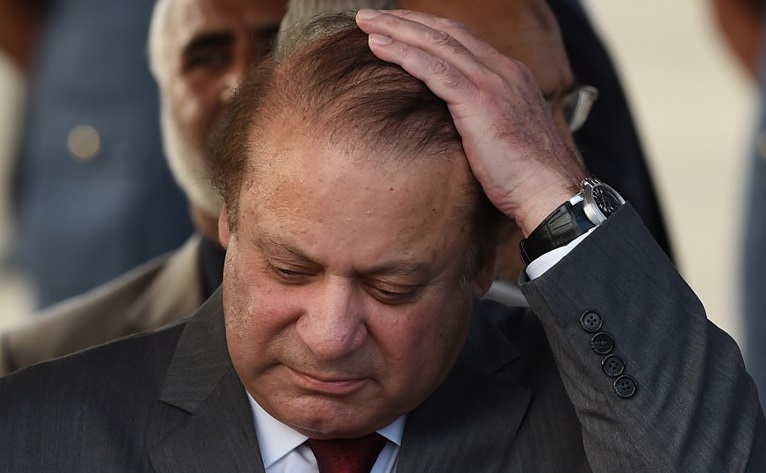 ISLAMABAD: An Accountability Court on Monday acquitted former Prime Minister Nawaz Sharif in the Flagship Investments while handed him 7 years of imprisonment and a fine of $2.5 million in the Al-Azizia Steel Mills corruption reference.

Police took Nawaz Sharif into custody from the courtroom. The court ordered police to shift him to Lahore on the plea of Nawas Sharif seeking his transfer from Adiala Jail to Lahore prison.

PML workers who were gathering outside the court, took to Kashmir Highway to protest the decision of the court. They raised slogans against the government, NAB and the court decision. The protestors also clashed with police.

In her reaction over the court’s decision, daughter of former Prime Minister Maryam Nawaz Sharif said Nawaz Sharif will come out successful of all this, Thanks God.

Earlier the verdict was expected before 10 am, but, it was delayed until 3 pm.

Accompanied by Hamza Shahbaz and other PML-N leaders Nawaz Sharif left for the Accountability Court amid high security this morning.

Earlier on December 19, accountability court Judge Mohammad Arshad Malik had reserved verdict in both the references filed by the National Accountability Bureau (NAB) against Nawaz Sharif.

A few leaders of PML-N including Ahsan Iqbal, spokesperson Marriyum Aurangzeb and Javed Hashmi arrived who were having permission of the registrar were permitted to enter the premises of the court.

Police and Rangers were deployed around the building and alongside roads leading to the court. Section 144 was imposed in the Islamabad and Rawalpindi.

Nawaz has appeared before the accountability courts more than 160 times in cases pertaining to accusations of money laundering, tax evasion and hiding offshore assets.

In September 2017, NAB filed three references against Sharif family in Avenfield Properties, Al-Azizia, and Flagship Investment on the directives of Supreme Court which it issued during its verdict on July 28, 2017.  SC also disqualified him for taking any public position.

On July 6 this year, Accountability Court sentenced former prime minister Nawaz Sharif to a total of 11 years in prison and slapped a £8 million fine (Rs1.3 billion) in the Avenfield properties reference.

Besides, his daughter Maryam was sentenced to eight years with a £2 million fine (Rs335 million) and his son-in-law Muhammad Safdar was also sentenced one year imprisonmen

But on Sept 19, the Islamabad High Court granted all three bail after suspending their sentences. NAB’s appeal against the suspension of the sentence remains pending before the SC.