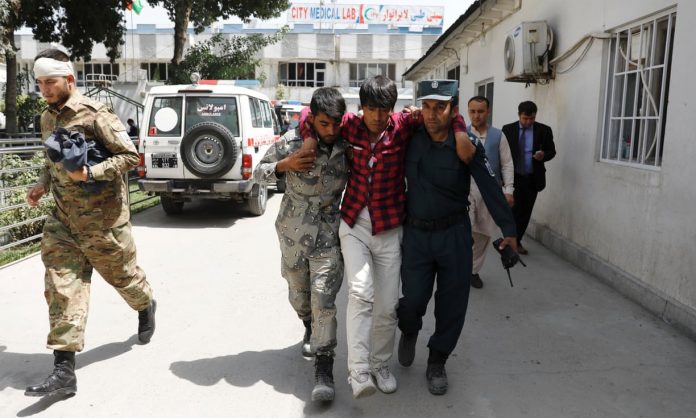 PESHAWAR: Nearly a hundred people were wounded when a suicide car bomber targeted police headquarters in Kabul on Wednesday.

Massive injuries have been reported in the huge blast, but there was no confirmation about any deaths. Police said a suicide car bomber exploded his car a security checkpoint outside the building of police headquarters.

Taliban militants claimed responsibility for the blast and said they aimed to target a recruitment center for security forces which was situated in the building. They claimed that a large number of soldiers and policemen were killed in the blast.

The suicide bomber exploded the car when he was stopped at the checkpoint outside the police station. Officials said at least 95 wounded people were taken to hospitals. Most of them were civilians, including women and children. Firing was also heard at the blast site after the blast.

The massive attack came in Afghan capital despite the fact that the Taliban militants are holding regular talks with the US officials for ending 18-year war in the country. It was second attack in the Afghan capital in as many days. Massive casualties are happening in Afghanistan in the continuous attacks despite the Taliban and US claiming unprecedented progress in the talks.

After nearly two decades of war, both the US and Taliban, for the first time, are looking in a hurry to clinch a peace deal to end the war. The main points of the deal will be agreement on withdrawal of US troops from Afghanistan, ceasefire by the Taliban and assurance by them to not allow the use of Afghan soil by terrorist to stage attacks in any other country.

The Taliban claim that agreement has been reached on about 80 percent matters and the issue of foreign troops’ withdrawal is also expected to be settled soon. The US wants to clinch a deal before the next month’s presidential elections in Afghanistan. The Taliban have already denounced Afghan presidential elections and announced to attack the election-related gatherings and advised the Afghans to stay away from such gatherings.