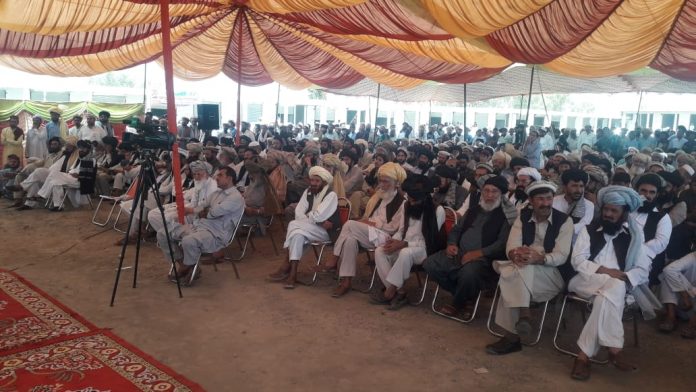 MIRANSHAH: A new Market ‘Intentional Vegetables and fruits Mandi’ was Inaugurated in North Waziristan’s Tol Khel area which would not only create job opportunities but will also create economic activities in the tribal district.

The new market was inaugurated by All Arthi association president Abdullah Khan who expressed the hope that it will strengthen Waziristan’s economy.” This Mandi will be helpful to export fruits and vegetables to Afghanistan and Central Asian countries,” said Abdullah Khan while addressing the ceremony.

Not only the people of North Waziristan but people from other areas of the province will be in a position to find jobs here in the Mandi as the districts are the worst victim of terrorism, there is a need of more such opportunities to be provided to the tribal people. tribal elders and elected representatives participated in the ceremony.

Haji Remaal Khan, who is the head of Waziristan traders association, said that tribal people will get more chances of employment here in this new fruit and vegetable Mandi. He added the Ghulam Transit route is 600 kilometres away via Torkham and Chaman border regions, major trade points between Pakistan and Afghanistan.

Hamid Remaal Khan has demanded that the government of Khyber Pakhtunkhwa and the federal government to immediately make arrangements for the supply of electricity, telephones, water and gas connections to that the Newly established Mandi.

On the direction of District Police officer Shafi Ullah Gandapur, strict security arrangements were made before the inauguration ceremony.

Deputy Superintendent of Police Syed Jalal, who was present in the ceremony, said that it is the duty of the provincial police to provide full security to the people doing business in the newly established vegetable and fruit Mandi. He ensured everyone that there will be no stone left unturned to provide all possible security to traders and businessmen in the tribal region.