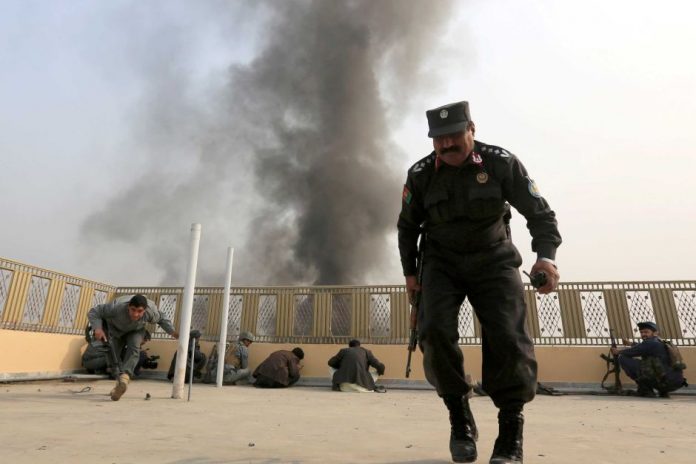 PEAHAWAR: At least nine people lost their lives and 11 others were injured in a suicide attack targeting vehicle of the security forces in Jalalabad city in Nangarhar province of Afghanistan on Thursday.

Provincial governor’s spokesman said a suicide bomber walked towards the vehicle of security forces and exploded himself in Jalalabad’s Police District Six in Familiha area. The spokesman, Attahullah Khogyani said the bomber exploded his suicide vest when a police vehicle was passing from the residential area. The dead included five civilians, including a child, and four policemen. Twelve more people, including civilians and policemen, were injured in the blast.

The attack came at a time when the US officials and Taliban leaders have intensified efforts for talks to bring end to more than 17 years of war in Afghanistan. However, the peace talks have failed to stop fighting and insurgent attacks across the war-torn country. The Afghan security forces have suffered massive casualties in these attacks. The targeted operations of Afghan security forces against Taliban and other militant groups are also continuing. Civilians also become target of attacks from militants and security operations which further complicate the situation.

Significant progress has been witnessed in the peace talks, which have been initiated with the help of Pakistan on the request of US President Donald Trump. However, the Taliban are not agreeing on direct talks with the Afghan government terming it a puppet of the US. They are also not ready to announce a complete ceasefire during the talks and have demanded withdrawal of foreign forces from Afghanistan before the ceasefire.

The United States special envoy for Afghan peace Zalmay Khalilzad is currently in Afghanistan to pursue his efforts to restart stalled peace talks aimed at ending the country’s war. Taliban have so far held talks with Khalilzad, other US representatives and also with prominent Afghans, including former president Hamid Karzai and members of opposition political parties, but they are still refusing to hold direct discussions with Afghan government. On Wednesday, the Afghan government also freed 490 Taliban prisoners from jails as a goodwill gesture for the peace process.