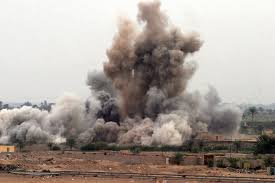 PESHAWAR, 25 April: As many as nine militants were killed which seven other sustained injured as the security forces blitzed their hideouts in Tirah valley, Khyber Agency, according to the Inter-Services Public Relations (ISPR).

The jetfighters targeted the hideouts of the militants located in different areas including Kandao, Ghrybai, Jrandy Rajgal and Nikai Tirah. .