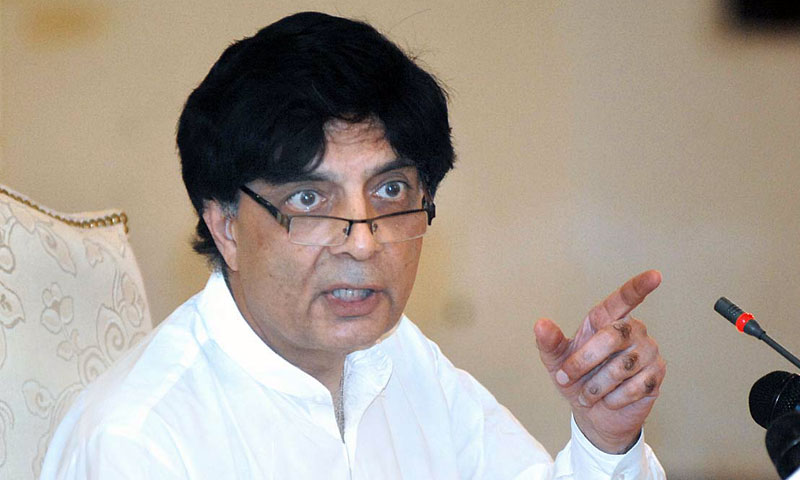 PESHAWAR, 17 December: Terming the findings of the judicial commission one-sided, Interior Minister Chaudhry Nisar has said he will challenge the report at every available forum.

Addressing a news conference in Islamabad on Saturday the Interior Minister said respect was more important to him than any office.

He said the commission in its report not only raised questions over his official responsibilities but also leveled personal and irrelevant allegations against him.

He said that he did not understand how the findings were made public without taking the government’s stance.

Nisar said he came to know about the report through the media, following which he had decided to resign from his position. He said he told Prime Minister Nawaz Sharif about his offer but the Prime Minister did not accept it and he was holding the press conference to let the media know each and everything about the matter.

It merits a mention here that an inquiry commission under the Supreme Court Justice Qazi Faez Isa has held the federal and Balochistan governments responsible for their inaction against militants and terrorists organizations. The commission in its findings had criticized the federal interior minister, Balochistan chief minister and home minister for providing misleading information following a deadly terrorist attack in Quetta’s Civil Hospital in August this year in which about 70 people, mostly lawyers, were killed and more than a hundred were injured.

The commission criticized the government and state apparatus in its “monumental failure to combat terrorism and perform basic protocols”.

In its findings, the report stated that the federal interior ministry lacks a ‘sense of ministerial responsibility’.

Responding to the allegations, Chaudhry Nisar said the commission in its findings termed him a “liar” which had hurt him. He said he would respond to all the allegations in the Parliament.

The minister said he made it clear to the commission that he never met any representative of the Ahle Sunnat Wal Jamaat (ASWJ) clarifying that a delegation of Difa-e-Pakistan Council (DPC) had called on him about the issue of some blocked CNICs.